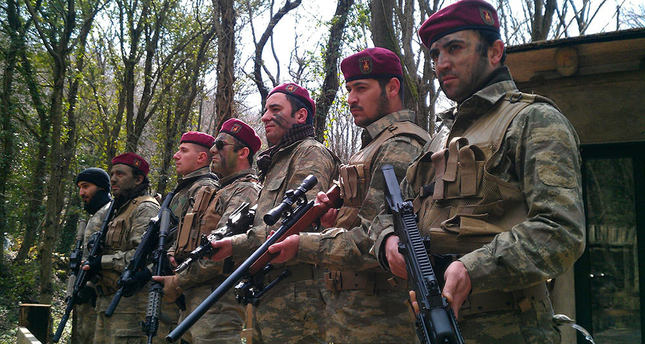 Turkey's representative offices in countries of high-security risk will be guarded by special forces appointed by the Turkish army from now on, following specific orders from Turkish Prime Minister Ahmet Davutoğlu. During the Turkish National Security Council's (MGK) meeting on Wednesday, Davutoğlu reportedly told the Chief of Defense Gen. Necdet Özel, "The police special operations teams are trained to prevent armed acts in residential or in rural areas, whereas the 'Bordo Bereliler,' (the Maroon Berets in English, the nickname for special forces command of the Turkish Armed Forces) are trained to ensure security at times of war."

Turkey's diplomatic buildings, notably embassies and consulates, are guarded by the police special operation teams. However, at the moment, another model is being discussed to protect the diplomatic missions in regions of high-security risk, following the recent kidnapping of 46 Turkish citizens and three Iraqi citizens working for the Mosul Consulate by ISIS militants on June 11. The civilians were rescued after an early operation on Saturday. On Davutoğlu's instructions, Turkey will appoint the army's special command forces to its representative offices in countries of combat-zones.