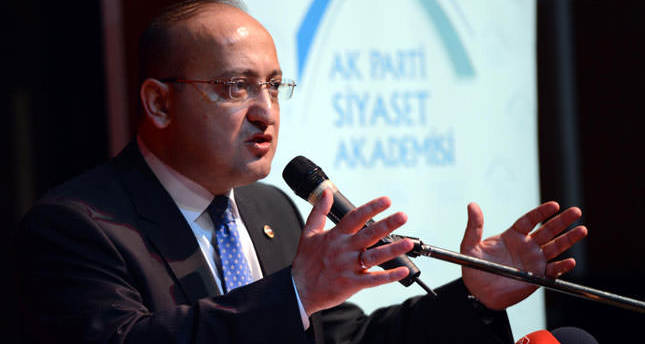 by Daily Sabah Sep 24, 2014 12:00 am
Deputy Prime Minister Yalçın Akdoğan, making clear the definition of joining military action said being involved in a military operation does not necessarily mean sending troops to fight against ISIS or hitting its targets.

Akdoğan met with journalists early on Monday during a breakfast held at the Turkish Radio and Television Corporation (TRT) to clarify the issue of whether Turkey, both a U.S. ally and NATO member, would consider armed engagement in the fight against the Islamic State of Iraq and al-Sham (ISIS).

Akdoğan criticized the foreign community's pushy approach to Turkey's lack of participation in the coalition with military support. He said that there are various ways of contributing to the coalition in the coalition's military contingent. "Giving military support should be set apart from carrying out an armed fight. Theoretically speaking, you can be involved in a military operation without sending troops to fight with ISIS or hitting its targets, such as by providing intelligence and logistic support. How this could be, or to what extent it should be, will be clear only after careful assessments are made," he said. Confusion mounted over whether Turkey will expand cooperation in combatting ISIS as the return of the 49 consular staff held hostage by ISIS prompted the international community to call for military support from Turkey.

Forty-six Turkish citizens including diplomats, consular officials and their families and three Iraqi citizens working for the Turkish Consulate in Mosul were kidnapped on June 11 a day after ISIS took control of the city.

Turkey refused to join the military action against ISIS out of a fear that the hostages held by ISIS might be hurt. The justified worries Ankara had over the issue was replaced by a feeling of discontent over the pressure by the international community as the hostage crisis was settled with their release on Saturday.

Prime Minister Ahmet Davutoğlu was the first to react to Western media outlets manipulating the country in forming a strategy against ISIS, saying Turkey's approach toward participating in international military action against ISIS will be shaped after every detail regarding the country is calculated by saying, "Turkey can make its own decisions," disregarding pressure from the international community.

Underlining that Turkey's stance had been stable since the government designated ISIS a terrorist organization, Akdoğan, at Wednesday's session further said it was Turkey that was seeking solidarity in the struggle against ISIS from the beginning. "A widened cooperation is being asked from Turkey, which for sure will be enabled. But the decision to figure out the means to the end requires a detailed discussion," Akdoğan said.

Dismissing the allegations that Turkey is supportive of ISIS as cheap manipulations, he said there are no blurred lines in the country's position toward ISIS and signaled that Turkey will not be subject to any kind of manipulation.