Gov't to expand scope of the mandate to send troops abroad 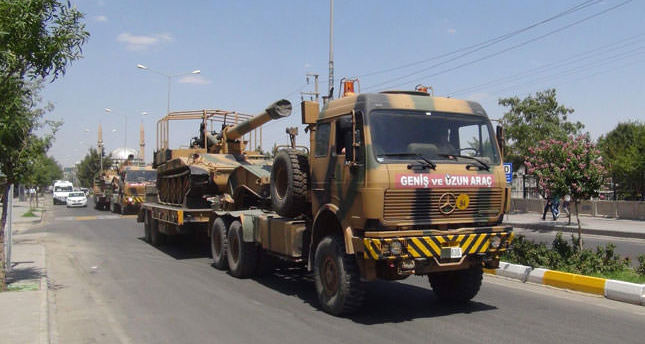 by Daily Sabah Sep 24, 2014 12:00 am
The Turkish Parliament will discuss the government motion on Oct. 2 to extend by a year a mandate authorizing the sending of troops into Syria and Iraq if needed. Government officials also signaled that the new motion will be broader than the previous one and that two separate motions could come to Parliament.

Indicating that Parliament will debate the government motion on Oct. 2 following its opening on Oct. 1, Deputy Prime Minister Bülent Arınç said that two separate motions would be sent to Parliament: "Regarding incidents in Syria and Iraq, two separate motions will be discussed and during those debates we will all find the answer to your questions. I cannot explain right now due to the fact that the resolutions have not yet been discussed and sent to Parliament. I know the outline but discussions after it is sent to Parliament would probably be more enlightening."

Explaining that the resolutions for Syria and Iraq would be different in some respects than the ones prepared last year, Arınç said, "We think it will be an inclusive resolution.

Speaking on behalf of the Cabinet, when this resolution is announced it will be an inclusive one in which nobody can say 'This is missing'," he added. Speaking on this issue, Prime Minister Ahmet Davutoğlu said that it is likely to widen the scope of the mandate. "Authorization of the deployment of troops will be renewed. Their scope will also be changed because our perception of national security and threats has changed in accordance with the developments in the region.

The Turkish Armed Forces will do whatever is necessary to ensure national security and we, as a government, will provide them a legal basis for them to take precautions to respond to the many risks and threats" said Davutoğlu said last week.

According to sources close to the government, the new mandate will have two main dimensions - humanitarian and national security - to allow the government to cope with the issues related to the growing refugee influx and to ensure the security of its borders and national security. Political circles in Ankara also said that there are three different options regarding the new mandate. First, the government will bring the bills separately for the deployment of troops in Syria and in Iraq with the same content. The second option is a unification of the bill with a widened authorization of troops in the case a possible buffer-zone is established. The third option emphasizes a brand new bill with important changes and anticipated authorization separately for Syria and Iraq. However, there is no consensus over the different options yet and it will be discussed in government meetings.

A current parliamentary mandate allowing Turkey to send troops into Syria is to expire in October. With the ruling Justice and Development Party (AK Party) enjoying a strong parliamentary majority, the legislation for the extension is expected to pass in Parliament without encountering problems.
Last Update: Sep 24, 2014 10:39 am
RELATED TOPICS