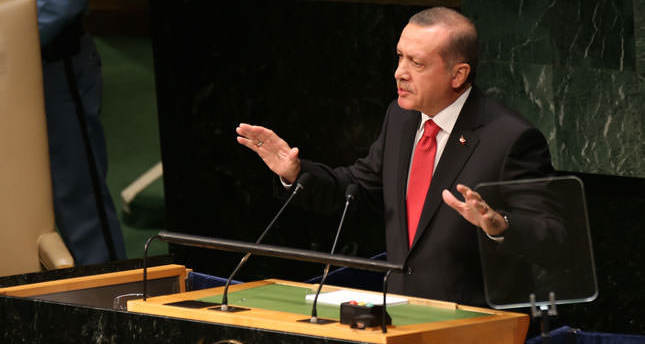 President Erdoğan, addressing the U.N. General Assembly, called for a comprehensive effort to stop the flow of foreign fighters to terrorist group ISIS

Turkey is ready to take the front line in the fight against the flow of foreign ISIS recruits, President Recep Tayyip Erdoğan said Wednesday at the U.N. Security Council. "Indeed, Turkey has done a lot to stop it; however, this is not something that Turkey can cope with alone," he added. The council, chaired by U.S. President Barack Obama, voted 15-0 to make countries classify citizens traveling overseas for the purpose of joining militant groups as a crime. The foreign terrorist threat needs to be addressed, starting with the countries where these terrorists come from, Turkish president said while adding that Turkey's priority is to prevent foreign fighters from entering the country. "ISIS is a bloody terrorist organization and the Turkish government has taken all legal measures against this group from the very beginning," Erdoğan said.

"The countries of origin have recently started to share intelligence with Turkey as the gravity of the threat has increased," he added.

U.N. Secretary General Ban Ki-moon welcomed the adoption of the resolution and said, "The world is witnessing a dramatic evolution in the nature of the terrorist threat." He added that the resolution would strengthen the implementation of the U.N. global counterterrorism strategy.

The U.S. president also addressed the meeting. "What brings us together today, what is new, is the unprecedented flow of fighters in recent years to and from conflict zones, including Afghanistan and the Horn of Africa, Yemen, Libya and, most recently, Syria and Iraq," he said.

Obama noted that U.S. intelligence agencies estimated that more than 15,000 foreign fighters from more than 80 nations have traveled to Syria in recent years.

The foreign fighter issue is not a new phenomena, but is a symptom of a bigger problem, the Turkish president said.

"Today, the failure of the states neighboring us on our southern borders has created a chaotic arena and a safe haven for terror groups," Erdoğan said while noting that Turkey had warned the international community against the threat of foreign fighters when Syria began to destabilize. The inaction of the international community, however, caused al-Qaida to revive itself and gain power with the support of the Syrian regime under the brand of ISIS, according to Erdoğan's assessment.

He also warned that any measure taken in this respect should not be open to the abuse of Islamophobic groups, that may use a policy of this kind against Muslims in different parts of the world.

The Turkish president also emphasized crises in a number of countries including Iraq, Afghanistan, Egypt, Libya, Palestine, Syria, Ukraine and Yemen are the issues, saying they should concern the U.N.

"It is noteworthy that some unjust labels were used for those trying to draw attention to the massacre of the children, women and even the disabled in Palestine. Those who raised their voices against the murders in Syria and Iraq and against the massacre of democracy in Egypt are also being unjustly labeled and accused of supporting terrorism."

In 2014, around 490 children were massacred in the Gaza Strip and 3,000 more injured, under the fire of the most modern artilleries, Erdoğan said while adding that Turkey supports a two-state solution in Palestine and the lifting of the blockade on the Gaza Strip.

"No one is innocent in a world where children die and are killed, no one has life security and no one can be in sustainable peace and prosperity," he said.

"The U.N. should waste no time in pulling its weight for a solution in Syria, Iraq and Palestine."

Erdoğan also criticized the current structure of the U.N. Security Council, where veto-wielding powers are given to only five countries.

"The world is bigger than five. It is unacceptable that only five countries render the U.N. ineffective regarding the developments in the world," said Erdoğan, referring to the failure of the Council to place sanctions on the Syrian regime and for not finding a solution in Palestine where more than 2,000 people were killed in 51 days of Israeli attacks.

Russia, the staunchest ally of the Bashar Assad regime in Syria, and China, have used their veto power a number of times on draft proposals that sought military sanctions on the regime if it continued to commit violence. "It is so obvious that this silence, despair and inaction should not last any longer. Quicker and more effective mechanisms should be formed for the solution of global and regional problems, and the U.N. should act bravely when it comes to the defending of that right," Erdoğan said.

"Turkey will continue to stand firmly against terrorism, oppressors, murderers and murderers of children, and defend the democracy and prosperity in a more strong and brave way," he said before requesting support for Turkey's Security Council membership bid for the 2015-2016 term.