Rumors of alliance with pro-Kurdish HDP causes stir in CHP 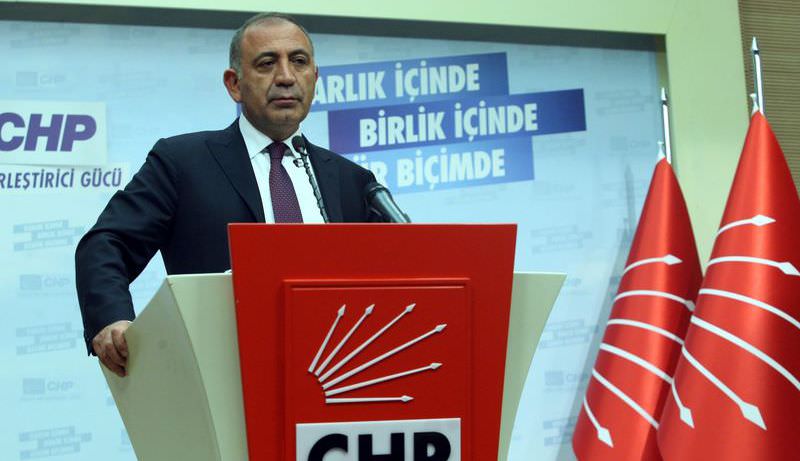 by Ali Ünal Sep 26, 2014 12:00 am
While Turkey is heading toward the general elections to elect 550 new members of the Turkish Parliament in June 2015, the dominance of the ruling Justice and Development Party (AK Party) and the prospect of a perpetuation of the party's rule for another term has led to discussions of possible electoral alliances.

Political circles in Ankara awash with claims that Turkey's main opposition Republican People's Party (CHP) and the pro-Kurdish Peoples' Democratic Party (HDP) have already started talks to form an electoral alliance for the upcoming elections. However, CHP Secretary General Gürsel Tekin denied the allegations with a written statement. Indicating that the speculations are made by referring to unfounded news related to "two parties that are to make alliance," Tekin said that conspiracy theories are constructed with misleading information. "As the CHP's secretary general I'm clearly saying what has been done is enacting perception management. Reports and news on this so-called alliance are in no way connected to reality," he said.

Despite Tekin's denial of the allegation, sources within the CHP believe that forming an electoral alliance between the CHP and HDP may not be as far-fetched as it appears. Furthermore, the CHP's previous efforts to form an alliance could support the claims. In 1991 the Social Democratic People's Party (SHP) entered the general election in an alliance with the pro-Kurdish People's Labor Party (HEP) and then the CHP and SHP agreed to merge in 1995. Later, officials from the Kurdish nationalist Democratic People's Party (DEHAP) confirmed that they met and discussed an election alliance ahead of the 2002 parliamentary elections. Moreover, former CHP Deputy Murat Karayalçın revealed in recent years that former CHP leader Deniz Baykal met with administrators of another pro-Kurdish party to discuss an electoral alliance in 2004.

According to political scientist Mustafa Altunoğlu from Anatolia University, in a likely CHP administration decision of cooperation with the HDP in the upcoming elections, no large objection would rise from party members. "In case of such cooperation, no doubt the CHP base would be discontent. Yet the possibility of the CHP's coming to power would break the wave of objection in significant measure," he said. Reminding that an alliance emerged between the CHP and Gülen Movement despite critics from the base before the local elections in March, Altunoğlu explained that a similar coalition may appear between those two parties as well.

For Altunoğlu, obstacles exist for seeing the impacts of a likely CHP-HDP alliance. "The greatest impediment before this alliance is temporary bilateral contact, which emanates only for elections.

Namely, this alliance would increase its chances of success unless it is limited to the election process. The CHP's previous efforts for accessing the Kurdish or conservative electorate had failed since it was just a strategy for the elections," Altunoğlu said and added, "Secondly, it is still obscure where this cooperation is located politically. If this is just for tarnishing the AK Party's hegemony, expectations would not be satisfied."

Meanwhile, Altunoğlu said that the CHP must stop its alliance with Gülenists in the case of another likely alliance with the HDP. "If the CHP is eager to keep Gülenists as a fellow, which the dimension of the relationship is out of clarity, probably it would be a big challenge to hold the HDP next to itself as a new fellow," he said.

Yunus Akbaba, a political analyst with the Ankara-based SETA Foundation, believes that any attempt at an alliance must be seen as "neutral" by both sides. "In this case, it is quite clear that it is an attempt to confront the inevitable rise of the AK Party. Therefore, the electorate will not easily show favor to any possible CHP-HDP alliance that does not meet any particular demand of the people. In other words, it will be perceived as an attempt to defeat the AK Party without politics." Akbaba also said that HDP representatives repeatedly expressed their thoughts and conditions for this initiative. "Their first condition was the necessity of the CHP's confrontation with its own history. In the last extraordinary congress, CHP leader Kemal Kılıçdaroğlu was expected to realize a Kurdish opening, however, he could not even mention the word 'Kurd' during his speech."

Meanwhile, the AK Party, which has come out ahead in three consecutive general elections, two referendums and three local elections from 2002 to 2014, seems likely to win the upcoming elections as well. According to a recent survey conducted by the Objective Research Center (ORC) in September to analyze public opinion in Turkey prior to the general elections in June 2015, revealed that 47.4 percent of survey participants supported the the AK Party. The survey also showed that the CHP remained just shy of 25 percent.