No Syrian refugee to be left behind 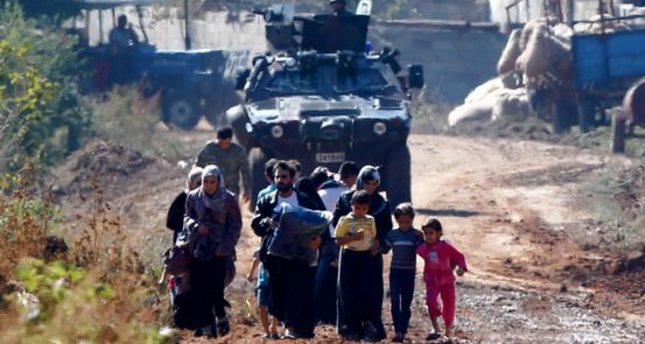 As the advance of ISIS toward Kobani threatens both the town and the lives of Syrian Kurds, PM says Turkey welcomes 160,335 Syrians with open arms

Since last week Turkey has been witnessing the highest influx of refugees, this time, Syrian Kurds who were driven from their homes by the Islamic State of Iraq and al-Sham (ISIS) – the largest migration in the four years of struggle in the region. A total of 160,335 Syrian Kurds fled to Turkey in the last week alone to escape ISIS attacks in Kobani, a strategic town on Syria's northern border with Turkey, Turkish Prime Minister Ahmet Davutoğlu announced on Friday.

A witness said that ISIS fighters advanced toward Kobani, battling Kurdish forces and sending at least two shells into Turkish territory. Launching an offensive to try to capture Kobani more than a week ago and besieging it on three sides, ISIS caused hundreds of thousands of Kurds to flee the town and surrounding villages since last Friday.

Crossing the border barefoot, in wheelchairs or crawling while trying to carry their belongings – some heavier than their own weight – Syrians have been fleeing to Turkey for four years since the Syrian uprising began with calls for democracy and freedom in the country but has since turned into a savage civil war killing thousands of people. The recent ISIS advance is triggering fears of even more displacement of the Syrian population.

War-torn Syrian refugees in Turkey saw how a life can be ruined by both civil war and the terrorism that has metastasized in the region, continue their life struggle. Agencies including the Turkish Red Crescent and Turkish Disaster and Emergency Agency (AFAD) provided humanitarian aid for those who crossed the border with heavy hearts.

Commenting on the influx of refugees, Deputy Prime Minister Yalçın Akdoğan said that Turkey will never put up a wall in front of civilians who are desperate to flee, because opening doors for those who suffer is a humanitarian duty and moral imperative.

Syrian Kurds who fled from Kobani arrived in the Turkish town of Suruç on Friday, Sept. 19. Upon their arrival the Turkish Red Crescent delivered water and energy-booster biscuits to the refugees who had walked kilometers to reach a safe place within Turkish borders. When refugee numbers increased, mobile kitchen units were sent to the region.

Adding the new arrivals, the number of refugees in Turkey now exceeds 1.5 million, officials said. A refugee camp hastily set up by AFAD for the fleeing Syrian Kurds can accommodate up to 3,000 refugees. After essentials such as electricity, container toilets and children's playgrounds were provided in the temporary refugee camp –known as a tent city – officials expedited its construction considering the worst-case scenario of coming refugees, according to officials in Suruç.

Syrian civilians seeking shelter from ISIS assaults on their villages are being registered at a coordination center set up by AFAD upon entry to Turkey. Visiting the temporary refugee camp, AFAD head Fuat Özkay said that Turkey does its best to relieve the pain of the refugees and added, "Once they see the living conditions in Turkey, they become more relieved."

Özkay added that considering what they have been through before crossing into Turkey, the Turkish Ministry of Families and Social Policies has started to provide psychological support for refugee children and families.

"ISIS members came to our neighbor village and killed most of our relatives there. We did not want to come [to Turkey], but we realized that death is creeping up on us," said Muhlem, expressing the fear of residents of Kobani.

Mahmut Sümel, who left Kobani with his wife and three children, is now residing in a classroom of a boarding school. Sümel said that no one helped them in Kobani and that there was no one to fight against ISIS in the town either.

"We fled due to the fear of death," Sümel said as he shared his harrowing story.

While expressing their gratitude to Turkey, most refugees said that they want to go back to their own towns as some already in Turkey are returning home, despite the sound of gunfire coming from the Syrian side of the border.

Another refugee who wanted to go back to her hometown – a woman in her 50s named Halise – said on Wednesday night that they were miserable even though their relatives in Turkey were trying to shelter them.

"Despite the life-threatening danger over there, we want to go back," she said.