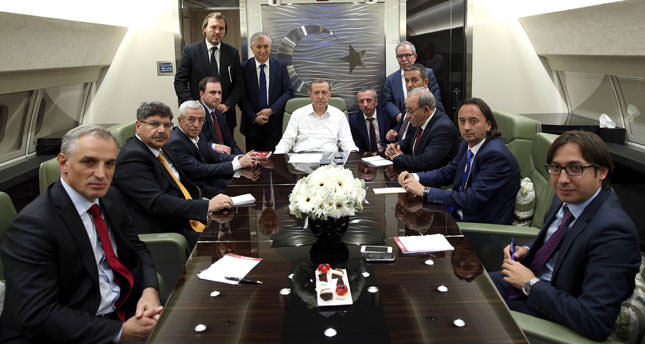 Turkey will provide political, military and humanitarian support to the anti-ISIS coalition, said President Erdoğan, adding that Turkey is pushing to establish a safe zone on the Syria border

President Recep Tayyip Erdoğan's five-day New York trip, his first as the head of state, saw him addressing the U.N. General Assembly, speaking at a panel on climate change, conducting 17 separate bilateral meetings with various heads of state and government. His main focus in New York was the growing threat posed by the Islamic State of Iraq and al-Sham (ISIS) and how to eliminate the group. Despite various attempts by the Western media to imply Turkey was tied to the growth of the ISIS threat, Erdoğan's stance on the anti-ISIS coalition and how to tackle the terrorist group silenced most critics. Before his return to Turkey, Erdoğan met with U.S. Vice-President Joe Biden and had a telephone conversation with President Barack Obama just to discuss how to cooperate and coordinate efforts against ISIS. On the return flight, I had the opportunity to discuss the trip and some local issues with the president. He talked about what Turkey would do against ISIS as part of the coalition and how he views the Gülen Movement's efforts to influence the elections at the Supreme Council of Judges and Prosecutors (HSYK), which is the country's top judicial watchdog.

Recep Tayyip Erdoğan: Turkey is combatting all terrorist groups in the region, especially ISIS, in full cooperation with the coalition. Turkey, as a NATO member, will fulfill its obligations in this fight. We will act together with the coalition in terms of military, political and humanitarian support. Coalition members will allocate the assigned tasks among themselves. It is important that Arabs are involved. At the end of the day, there is determination within the coalition. Obama said there were 104 countries supporting this initiative. I believe this number will increase.

Turkey is directly affected by what's happening. That's why Turkey will first decide what it needs to do. As soon as we return, we will hold a security summit and assess what Turkey needs to do with the government. Parliament will pass a mandate, the content of which we will assess, on Oct. 2, and we will take all necessary precautions to secure our borders, including military engagement. After that, what Turkey will do will become clearer. Unlike other countries, Turkey also has borders with this terrorist group and we will take the necessary precautions. Turkey's borders can be protected by the Turkish military alone.

We want a no-fly zone and a safe zone. The safe zone we want is crucial for Turkey. 1.5 million people have fled from war to our country. We propose the establishment of a safe zone on the Syrian border for these people. Once the safe zone is set up, it can be protected in two ways. 1: A no-fly zone will be set up. 2: The military will protect the safe zone. The coalition will discuss such matters. The U.S. was at first, a bit standoffish, but I believe they are now onboard.

We discussed these issues with Obama and Biden. There is no disagreement. The anti-ISIS coalition is growing by the day.

Even though Turkey is not a member, we were invited by Obama to the U.N. Security Council meeting. The issue of foreign fighters joining ISIS was an important topic of discussion at the meeting. You know, Turkey was faced with a constant stream of accusations on the matter. However, there, everyone confessed their culpability. France said close to 1,000 fighters had come from its own country. The U.K. mentioned around 600 militants. Everyone admitted that many foreign fighters from across Europe, including Germany, joined ISIS. They, of course, came to Turkey as tourists and it appears once they entered Syria, they armed themselves. They themselves admitted this.

Both Russia and China reacted positively to the objectives of the fight against ISIS.

We fully support the air operation conducted by the U.S. against ISIS. We see it as a very appropriate step and support it fully. If these airstrikes had not been started, ISIS would have taken over Northern Iraq. This operation has stopped ISIS's momentum.

The fight has now become comprehensive. Both Iraq and Syria need to be stabilized. We have nothing against the current Iraqi regime. Iraq currently has an elected government. We hope it won't repeat the mistakes of the previous one.

Q: The Western media is implying that Turkey is reluctant and does not give its full support to the coalition.

ERDOĞAN: Firstly, things were totally different when we had 49 hostages in the hands of ISIS. Naturally, the safe of our citizens took priority over everything. When they had 49 hostages, our stance was not the same as it is today. We freed our citizens after a successful operation. Now, we are taking a different stance.

Q: What part will Israel, the U.S.' closest ally in the region, play within the coalition?

Q: What about the elections for the HSYK?

ERDOĞAN: We are closely following what is happening at the top of the judiciary. If there is an illegal structure within the judiciary that threatens its independence, we have plans B and C. We will take the necessary steps to ensure the judiciary is independent.