Turkish army could be used in Syria, says Erdogan 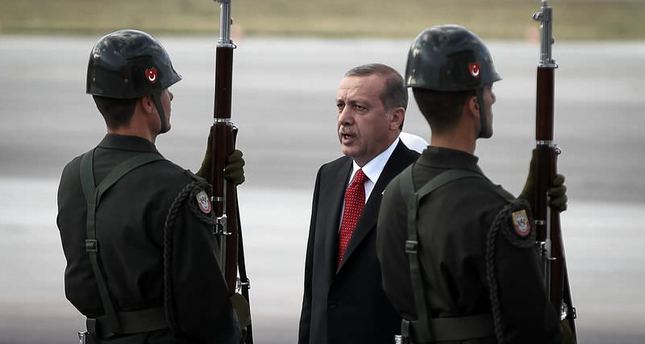 by Daily Sabah with Agencies Sep 27, 2014 12:00 am
Turkish army could be used to help set up a secure zone in Syria, if there was an international agreement to establish such a haven for refugees fleeing ISIS militants, Turkish President Tayyip Erdogan said in comments published on Saturday.

Turkey has so far declined to take a frontline role in the U.S.-led coalition against ISIS but officials said earlier this week that Erdogan has been negotiating on what Turkey's role might now be.

"The logic that assumes Turkey would not take a position militarily is wrong," Erdogan said in an interview with the Hurriyet newspaper on his way back from New York, where he attended the United Nations General Assembly meetings.

Erdogan said negotiations are underway to determine how and by which countries the air strikes and a potential ground operation would be undertaken and that Turkey is ready to take part.

"You can't finish off such a terrorist organisation only with air strikes. Ground forces are complementary ... You have to look at it as a whole. Obviously I'm not a soldier but the air (operations) are logistical. If there's no ground force, it would not be permanent," he said.

Turkey would defend its border if necessary, Erdogan said and added that the necessary steps would be taken once a parliamentary mandate that enables Turkish troops to conduct operations outside its borders would be passed next week.

"No one is responsible for protecting your borders," Erdogan said. "Will other people come and protect? We are the ones who will protect our own borders," he said.

Asked if Turkey might set up a secure zone for refugees in Syria on its own, Erdogan said: "That (should be done) with those in the region. By speaking to each one of them. Because we need to have a legitimacy within the international community.

"This is not only about Turkey but about 1.5 million people returning to their own land. To help settle these people are among the issues that are being discussed," he told the paper.

In response to Erdoğan's comments, the main opposition Republican People's Party (CHP) leader Kemal Kılıçdaroğlu said that his party is not in favor of deploying Turkish soldiers to other countries. He said, "We will first look at the content of the mandate (allowing Turkish troops to conduct operations abroad)." and continued by saying that the CHP does not want the Turkish amy to get into a war.

Meanwhile early on Saturday air strikes, believed to have been carried out by U.S.-led forces, hit ISIS in eastern Syria, the Britain-based Syrian Observatory for Human Rights said.

The group has maintained its grip on territory on three sides of a strategic Syrian Kurdish town, Kobane, on the border with Turkey, with sporadic clashes continuing on Saturday and heavy weapons fire heard, a Reuters witness said.

Militants still held their positions around 10 kilometres west of Kobane inside Syria, the Reuters witness said, with Kurdish positions the last line of defence between the fighters and the town.

Kobane sits on a road linking north and northwestern Syria and Kurdish control of the town has prevented ISIS militants from consolidating their gains, although their advance has caused more than 150,000 Kurds to flee to Turkey since last week.