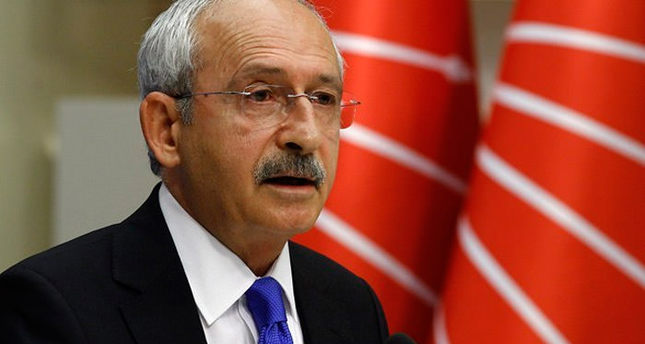 by Daily Sabah Sep 29, 2014 12:00 am
Commenting on the government and President Recep Tayyip Erdoğan's remark on giving military support to the anti-ISIS coalition, the main opposition Republican People's Party (CHP) leader Kemal Kılıçdaroğlu said that his party is not in favor of deploying Turkish soldiers to other countries. He said, "We will first look at the content of the mandate [allowing Turkish troops to conduct operations abroad]." He continued by saying that the CHP does not want the Turkish military to get into a war.

Kılıçdaroğlu previously said at a meeting organized for the 91st anniversary of the establishment of the party that the CHP will not stand against Turkey's inclusion in any international operation against ISIS. The CHP leader's move came a week after Prime Minister Ahmet Davutoğlu called on opposition parties to bring proposals and recommendations and make a positive contribution instead of engaging in petty political calculations.

Meanwhile early on Saturday, air strikes, believed to have been carried out by U.S.-led forces, hit ISIS in eastern Syria, the Britain-based Syrian Observatory for Human Rights said.

The group has maintained its grip on territory on three sides of the strategic Syrian Kurdish town, Kobani, near Turkey's border, with sporadic clashes and heavy weapons fire continuing on Saturday, a witness told Reuters news agency. ISTANBUL / DAILY SABAH