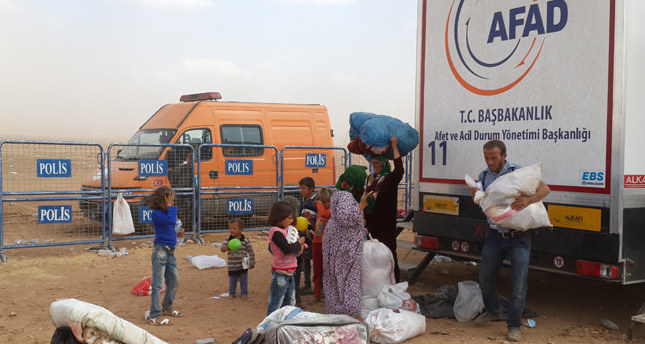 by Ali Ünal Sep 29, 2014 12:00 am
US-led coalition airplanes started air strikes against so-called Islamic State (ISIS) militants near Syrian border town of Ayn al-Arab, known as Kobani in Kurdish, which besieged by ISIS militants for almost ten days. However, air strikes that continued over the weekend have done little to dislodge ISIL militants and failed to protect civilians who running away from ISIS's assault.

Amid this conflict the Syrian civilians seeking shelter from the ISIS assault and continue to flow into Turkey, upon the welcoming of the Turkish government. Number of the refuges exceeds 160,000 since ISIS began its attack on the town more than a week ago. Salih Rakap 41, one of the thousands of tired and devastated Syrian refugees who escaped Turkey. ''I had to leave my house and left everything behind'' Rakap said on Sunday just after enter Turkey at the Yumurtalık crossing gate near Suruç, Turkey. ''Thanks God we escaped Turkey and saved our lives from those [ISIS] brutal'' Rakap added while Turkey's Disaster Management Authority (AFAD) officials completing his and family's registration before send them to their refugee camps where they will find hot meals and a place to sleep.

Suruç is border city at Syrian border with a regular population of 100,000 residents; however population of the city almost tripled within a week due to massive refugee influx. All the school, mosques and public building turned into temporary accommodation for the refuges. Besides AFAD officials continue their work to build tent cities around the town even during the heavy rain on Sunday. Zaynap Guran 75, is one of the refugees at tents of the Süleyman Şah Park which turned into temporary camp. ''I walked three days to reach Turkish border, with limited water and some bread.'' old women said while she was watching the rain. ''After we crossed the border they brought us here and we living in this tent for the last 4 four day. We have food and shelter so I'm grateful'' Guran added.

Despite thousands of refugees have poured into Suruç over the past week, there is no chaos in the city. ''Even though they came from the other side of the border they are our brothers. My 9 relatives from Kobani staying with me at my house, we cannot turn our backs on them'' a local shop owner Ahmet Akgün, 45, stated.

Meanwhile Turkish government officials continue to follow closely humanitarian work. After Deputy Prime Minister Yalçın Akdoğan's visit to Şanlıurfa, Minister of Work and Social Security Faruk Çelik visited Yumurtalık border on Saturday to meet the Syrian Kurdish refugees. Minister Çelik stated that Turkey welcomes all refugees who cross in to Turkey from the Kobani, and reiterated that the government will build new camps in the region to provide shelter for the refugees. "Turkey also opened its borders to the vehicles and animals of the refugees upon President Erdoğan's instruction." Çelik added.