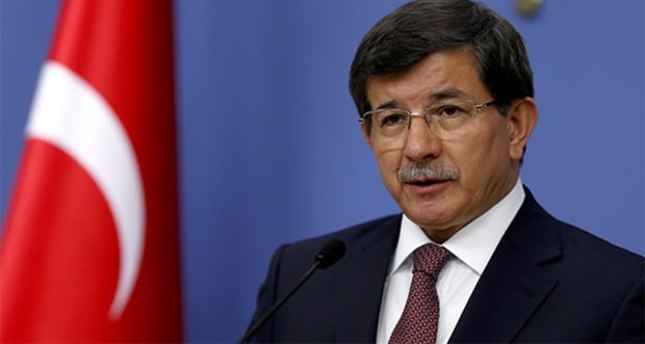 by Daily Sabah Sep 29, 2014 12:00 am
Turkish Prime Minister Ahmet Davutoğlu called the extremist Islamic State of Iraq and al-Sham (ISIS) "barbaric" and "ignorant" and said they do not represent Islamic civilization whatsoever, in one of the most strongly worded reactions from Ankara against the world's deadliest group. Davutoğlu's statement came at a time when his government is considering ways to contribute to the U.S.-led coalition's military action against ISIS in neighboring Iraq and Syria. "The common point of those who link ISIS to Islam is their ignorance. On the other hand, the barbarism ISIS is committing today is the product of its own ignorance," he said.

"The civilizations of Islam and Islamic communities that exist or have existed cannot be linked with ISIS. ISIS cannot be linked to Islam," Davutoğlu said in a lengthy speech he delivered at a ceremony for the beginning of the academic year at the 19 Mayıs University in the northern province of Samsun on Sunday.

Speaking critically of international society, Davutoğlu recently accused the world powers of taking no action when Syrians were suffering at the hands of the Assad regime. "International society, which failed to speak up against the killing of people with chemical weapons in Syria, should prove itself." Davutoğlu said, implying the United Nation's failure to issue a decision over the matter.

Reiterating that Turkey's stance toward ISIS has not changed since the day ISIS emerged, Davutoğlu said they "labeled ISIS militants as terrorists" even before the hostages were held in Mosul and stated that Turkey will never tolerate its offences which not only harm people but also Islam.

President Recep Tayyip Erdoğan also said Turkey opposed terrorism and terrorist groups of all forms but could not approve efforts to equate the violence perpetrated by ISIS with Islam. Commenting on the ongoing threat posed by ISIS, Erdoğan said that Turkey strictly opposes the concept of "Islamic terrorism."

"Indiscriminately, Turkey is against all kinds of terror and terrorist organizations. We [Turkey] never ever accept the 'Islamic terrorism' concept," Erdoğan said, denouncing those who associate Islam with terrorism. "Islam is derived from peace. Nobody can attribute terrorism to Islam. We will not accept such a thing as Sunni or Shiite terror. We are members of a religion that rejects sectarianism. None of the approaches that make an attempt on someone's life gains acceptance in our eyes."

As world leaders seek an effective strategy to combat the increasing ISIS threat and violence in Iraq, U.S. President Barack Obama and British Prime Minister David Cameron recently showed that they are in agreement with Erdoğan's statements.

Obama, in his prime-time speech to the nation on the eve of the 13th anniversary of the 9/11 terror attacks, made a particular point of declaring that the actions of ISIS terrorists "are not Islamic." Giving a speech to the House of Commons over the increasing ISIS threat in European countries, Cameron highlighted that the ideologies of ISIS have nothing to do with Islam by saying, "There is a poisonous ideology of Islamist extremism that is condemned by all faiths and by the leaders of all faith."