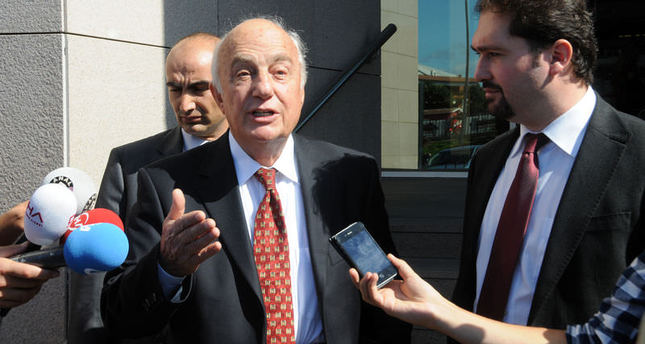 by Daily Sabah Sep 30, 2014 12:00 am
Retired Gen. Çetin Doğan who was arrested as part of the Sledgehammer (Balyoz) coup plot probe and later released pending trial after the constitutional court ruled the retrial of coup suspects, has filed a complaint against the former head of the Istanbul police's counterterrorism unit accusing him of plotting against Turkish military officers.

Çetin Doğan filed some documents to be submitted to court which reportedly will lead to elimination of the Gülenist movement accused of wiretapping thousands of people including Turkish government officials and encrypted phones.

Doğan was sentenced to 20 years in prison for attempting to topple the government but was later released pending trial on Jun 19, 2014, a day after the Constitutional Court ruled that the rights of 230 convicts were violated and that they should be retried.

Doğan, this time, gave a statement to the prosecutor's office not as a suspect but as a plaintiff within the scope of the investigation into suspects who were allegedly involved in plotting against the military officers during the Sledgehammer trial.

After the fabricated Selam-Tawhid terrorist organization case dropped, Yurt Atayün along with numerous police officers allegedly affiliated with the Gülen Movement were detained throughout the country for a number of charges including unlawful wiretapping and espionage, and attempting to overthrow the government.

Doğan in a file he submitted to court claimed that Atayün turned 'First Tubitak report' into a detection statement after distorting it.

The Scientific and Technological Research Council of Turkey (TÜBİTAK) expert report in Jan, 2014, similarly revealed that a key piece of evidence in the Sledgehammer case was in fact manipulated. The case, which saw 43 people charged with plotting to overthrow Turkey's democratically elected government, relied on this key piece of digital evidence until this latest expert report revealed its falsity.

The word document in the report titled 'the sledgehammer coup plan' contained names of organizations that are known to be 'close' to the plan. An organization established by Atayün in 2006 which was in the list as 'friendly elements' in the coup plan initiated in 2003 was changed into another name of an organization by Atayün while informing the prosecutor's office, a finding which Doğan believes is tangible evidence that Atayün was involved in a plot against military officials.

"The ones who planned the sledgehammer case include police officers and various other judges and prosecutors unfortunately. There is a parallel structure for sure. If the documents we submit the court is carefully assessed, the fight we give against the parallel structure ends in success." Doğan was quoted as saying.