Military action against ISIS to be submitted to Turkish Parliament 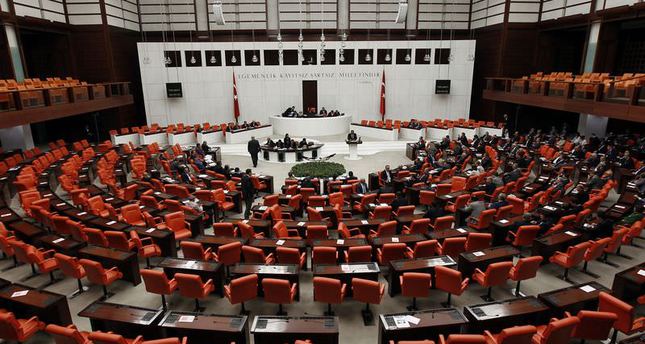 by AA Sep 30, 2014 12:00 am
The Turkish government has submitted an inclusive motion to parliament to expand authorization to act against recent security threats from Iraq and Syria, Turkish Deputy Prime Minister Bülent Arınç said.

"Considering Turkey's related position, we have worked out and prepared a document uniting two separate motions on Iraq and Syria, enabling all necessary measures at one time, so as to respond to all threats and risks," said Arınç, speaking after Tuesday's Council of Ministers' meeting chaired by Prime Minister Ahmet Davutoğlu.

The Turkish parliament will discuss the motion, giving the authority to the government and the armed forces to act accordingly to threats from Syria and Iraq, during a special session on Thursday.

"If there will be a request for closed session, we will consider it," Arınç added.

The minister emphasized that the motion also aims to give the government and armed forces authority for action against elements in Syria and Iraq who pose a threat to the country, including ISIS, which has recently become a growing threat for the whole region.

Turkish troops are currently authorized by the parliament to operate across the Iraq border to defend Turkey against the outlawed Kurdistan Workers' Party, or PKK, and the regime forces of Syrian President Bashar al-Assad.

The session on Thursday was originally aimed to extend the term of already existing motions on Iraq and Syria that were going to expire on October 4 and 17 respectively.

Turkey is facing a massive influx of Kurdish refugees from Syrian border town of Kobani since ISIS militants launched attacks around the town, drawing more than 160,000 refugees to cross the border to seek shelter in Turkey.

Turkey has called on the U.S. and the U.N. to produce a comprehensive strategy for Iraq and Syria that would also include setting up no-fly and safe zones in the border region for displaced people fleeing ISIS and removal of President Bashar al-Assad's regime in Syria.