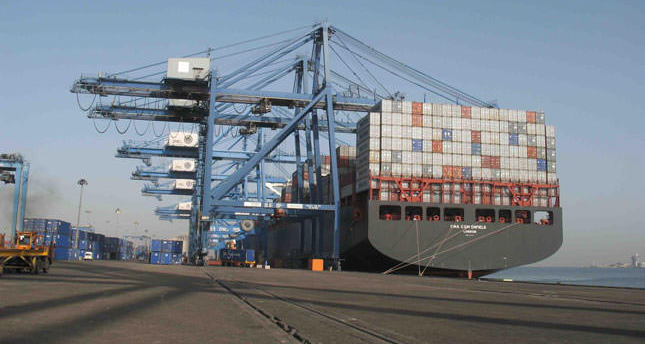 by AA Oct 01, 2014 12:00 am
Egypt is not mulling the cancellation of a maritime transport deal with Turkey despite recent political tension between the two countries, an Egyptian official said Wednesday.

"Reports that the deal is to be scrapped are untrue," Said Abdullah, a senior Egyptian Trade Ministry official, told the Anadolu Agency.

Local media recently reported that the government was mulling the termination of its "Ro-Ro" (roll-on/roll-off) deal with Turkey for the transport of Turkish containers to the Gulf via Egyptian ports, saying Egypt had little to gain from the agreement. "The deal is based on reciprocity; the agreement will not harm the Egyptian economy," Abdullah said.

Signed in March 2012, the three-year agreement allows Turkish products to be shipped to markets in the Arab Gulf through the port of Damietta on Egypt's northern coast. After Syria closed its ports to Turkish goods, Turkey resorted to Egypt's port of Damietta on the Mediterranean Sea where Turkish containers are transported by land to Egypt's Al-Adabiya port on the Red Sea and from where Turkish ships carry them on to the Gulf.

"Egypt is going to gain a lot from the agreement in the upcoming period, as the government hopes to open new export markets in Russia, Ukraine and Belarus, and we are going to use this shipping line," said Abdullah.