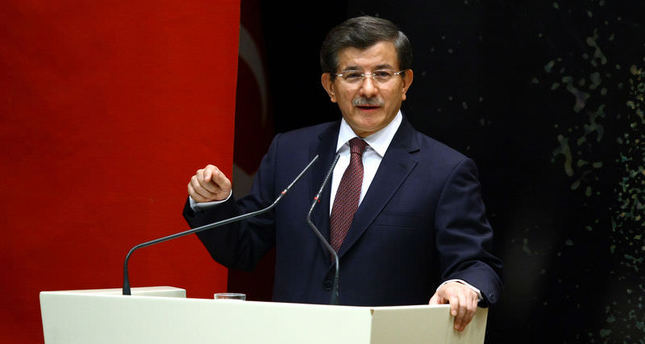 In his address to the nation on TV, Prime Minister Ahmet Davutoğlu vowed that his ruling AK Party government is determined to fight against the Gülen Movement, which is accused of conducting various illegal activities within the state apparatus

On Wednesday, Prime Minister Ahmet Davutoğlu said the government will continue its fight against anti-democratic entities, in reference to the Gülen Movement, which is accused of attempting to overthrow the elected government through its agents within the police department and judiciary and for orchestrating 17 Dec. and 25 Dec. operations.

Speaking on live television, Davutoğlu said that Turkey had pulled off a "remarkable achievement" in carrying out an operation that led to the release of 49 hostages, and added that they won't permit circles that aim to gain profit out of the crisis to reach their goals – referring to the Gülenists.

The Gülen Movement, led by the U.S.-based imam Fethullah Gülen who lives in a self-imposed exile in rural Pennsylvania, is accused of wiretapping thousands of people including Turkish government officials and encrypting phones with the help of affiliated members of law enforcement, public prosecutors and judges. Gülen's followers are believed to have orchestrated a corruption probe against Erdoğan and his inner circle, which emerged last December, in order to overthrow the government.

"Turkey will not tolerate any groups conducting illegal activities, including the 'Parallel Structure.' Thanks to the rooted democracy Turkey has adopted, the expectations of a crisis failed to come true," Davutoğlu said.

Explaining that the new Turkey will not allow mafia-like shadowy organizations to infiltrate state institutions, Turkish President Recep Tayyip Erdoğan said, "This moralless structure won't benefit anyone. They're seeking to damage democratic politics with the power of public institutions."

The tension between the Gülen movement and the government escalated once again as Gülenists fabricated various false claims regarding the operation in which 46 Turkish citizens were rescued from the hands of the self-proclaimed Islamic State of Iraq and al-Sham (ISIS). The Gülenists' attitude over the release of the hostages' sparked criticism among the public as well, as every section of society shared the happiness of their release, except the members of the movement. Even main opposition party leader Kemal Kılıçdaroğlu congratulated Davutoğlu over the success of the operation conducted by Turkey's intelligence agency, and high-level officials. The society-at-large slammed the hostile approach of the Gülenists.

Davutoğlu castigated the movement for their false and accusatory remarks over the hostage crisis, and said, "You all know the lies they told about our intelligence chief. Recently, this organization [Gülen Movement] is trying to humiliate our rescue operation and is also trying to find something to accuse us of. These people do not know how to share the people's joy and sorrow, but we'll teach them how to enjoy good news with the nation."

Davutoğlu emphasized that the window for political operations that seek to topple the government has been closed. "Every single citizen of this country can be sure that this 'vehicle' of civilization will continue moving, keeping up its pace every passing day," Davutoğlu said.

Promising to heal Turkey's bleeding wounds, the issue of the PKK took the lead and Davutoğlu said they will come up with firm solutions to the problems that Turkey faces.

"Carrying out the reconciliation process in a healthy manner, we vow to refrain from any moves that would hurt the integrity of the nation and never let our order, peace and friendship be ruined by any kind of factors."

Expressing content over taking over the current president's former post of prime minister, Davutoğlu concluded his speech by extending appreciation towards Erdoğan for his services.