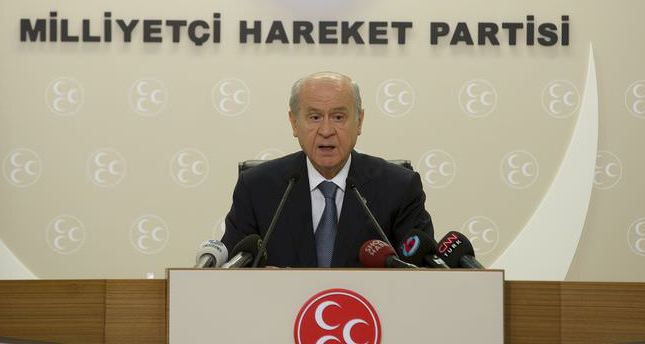 by Daily Sabah Oct 01, 2014 12:00 am
The leader of opposition the Nationalist Movement Party (MHP), Devlet Bahçeli has recently expressed that his party supports the motion seeking authorization to conduct military activities against ISIS and other terrorist organizations in Iraq and Syria which was submitted to the Parliament on Tuesday. The motion is expected to be approved by the Turkish parliament on Thursday, before the religious holidays.

Despite the fact that MHP has previously expressed its hesitance to support the motion authorizing cross-border military operations in Iraq and Syria due to its concerns about foreign troops in Turkey , Bahçeli has stated that his party chooses "Turkey's national security".

MHP has convened to discuss the issue and has expressed that they will vote 'Yes' to the troop deployment motion. "We are giving authorization to the Turkish Armed Forces" said Bahçeli, who stated that ISIS poses a direct threat to Turkey and must be stopped while noting that the MHP as a party reserves all rights to criticize the motion despite the fact that they will be approving it.