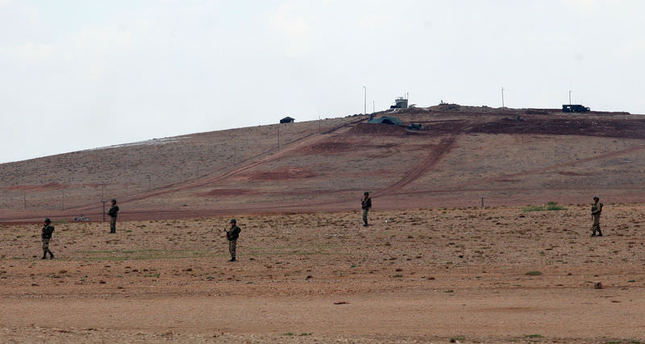 by AA Oct 02, 2014 12:00 am
Experts say the plan to establish a safe haven on the Syrian side of the Turkey-Syria border will only be entirely safe if it is supported by a no-fly zone to protect it from aerial attacks by the Syrian regime or other groups.

Ankara says establishing a no-fly zone and a safe haven in Syria near the Turkish border are priorities if Turkey is to take part in an international coalition against the extremist Islamic State of Iraq and al-Sham (ISIS) group in Iraq and Syria, which has recently started airstrikes against the group.

Turkey's calls for the U.N.-approved areas on its Syria border have fallen on deaf ears since 2012.

The country says it needs a safe haven near the border to halt a massive flow of Syrian refugees fleeing ISIS attacks inside Syria. The inflows started Sept. 19 and more than 150,000 Syrian Kurds have recently passed into Turkish from the town of Kobani in Syria.
"You can't protect land without owning the sky," Michael Weiss, a U.S. columnist writing on the Middle East, said in a written response to an Anadolu Agency (AA) piece.

He said a safe haven would not be entirely safe from the regime of Syrian leader Bashar Assad unless it were backed by the air power of the U.S. and its allies.

"Fighter jets or unmanned drones cannot only eliminate Assad's air campaign against the rebels and civilians in these areas, which inflicts the worst suffering, from chlorine bombs to barrel bombs, but they can also target the regime's ground-to-ground weaponry such as artillery cannons, tanks, Scud missile launchers, etc.," Weiss wrote.

He said the creation of a no-fly zone would be easy for the coalition forces because the Syrian regime's air power is vastly inferior to that of the coalition.

He said setting up a no-fly zone from Idlib in northwest Syria to Raqqa province in the northeast could be easily accomplished because the Syrian regime's air defenses in the region are "low-grade and are practically non-existent or defunct now, thanks to ongoing years of fighting."

Establishing a no-fly zone would bring positive change for many Syrians given the large number of casualties inflicted through aerial bombings, Thomas Pierret, a lecturer in contemporary Islam at the University of Edinburgh, told AA.

"It is true that the regime could still attack these zones with artillery and ballistic missiles," Pierret said, "but first, classical artillery is not as destructive as aerial bombings. And second, ballistic missiles are extremely expensive and only available in limited numbers, which means they can't make up for the absence of airpower."

Veysel Ayhan, the head of the International Middle East Peace Research Center, an Ankara-based think tank, emphasized that there are armed groups on the ground other than the regime – "most especially ISIS" – that do not hesitate to attack civilians.
"There are conflicts everywhere in Syria and providing for the security of the Syrian people inside such zones requires serious military protection," Ayhan said. "Any buffer-zone or safe zone that is not supported by a no-fly zone would only create further insecurity and instability."

Experts accepted that setting up any safe haven or no-fly zone is not something to which the U.N. Security Council will consent given Russia's position that such actions would violate the Syrian regime's right to sovereignty.

Vetoes by Russia, a stalwart ally of the Syrian regime, and China have thus far prevented the U.N. from taking any actions to make the Syrian regime halt its attacks on its country's people.

However, Weiss said there is still room for establishing a no-fly zone, which would help Free Syrian Army brigades and battalions, which are allied with the international coalition in the fight against ISIS.
The U.S. has already started sending anti-tank missiles and financial support to some armed groups in Syria in a covert program to train and vet moderate Syrian rebels, The Washington Post reported Tuesday.

"What they need most is air cover because they're easily bombed by regime fighter jets and helicopters," Weiss said of the armed opposition groups.

Oytun Orhan, a research fellow at the Ankara-based ORSAM think tank, said air cover is what the Syrian armed opposition needs most in order to gain ground.

"Armed Syrian opposition groups need an environment in which they could organize easily, without being exposed to regime attacks," Orhan said.

"The most important deficiency of the armed opposition is the aerial superiority of the Syrian regime," he said. "Even though the regime could not control the regions seized by the opposition from the ground, they bombed these regions from the air."