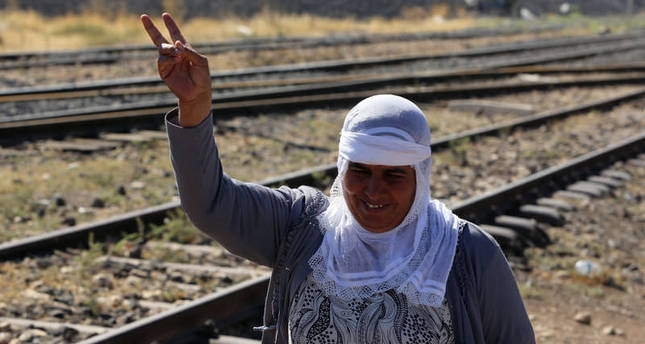 by Daily Sabah Oct 02, 2014 12:00 am
On Thursday, the PKK's jailed leader Abdullah Öcalan said the reconciliation process talks between the Turkish government and the PKK will disintegrate if the Islamic State of Iraq and al-Sham (ISIS) militia carries out a massacre in Kobani.

In recent days, ISIS militants have advanced close to the Syrian Kurdish town of Ain al-Arab, known as Kobani to the Kurds, a few kilometers south of the Turkish border.

"The siege of Kobani is far from being just an ordinary siege," Öcalan said in a message relayed by supporters from his prison on the island of Imrali. "It does not only target the democratic gains of the Kurdish people, but would lead Turkey to a new era of coups. If this attempt at a massacre succeeds, it will not only end the peace process, but will also pave the way for a new and long-lasting coup," he said, according to the pro-Kurdish Fırat News Agency.

Although recent provocations, including the takedown of the Turkish flag at the Air Force Command and erecting a statue of a PKK member in the predominantly Kurdish southeast of Turkey, were attempts to undo the reconciliation process, Kurdish exiles who left Turkey years ago have started to return as part of the process. The reconciliation process began in early 2012 to end the PKK threat and address the problems of the Kurdish community. The government pledged democratic reforms to empower minorities, particularly the Kurds, which is the largest at 18 percent of the population. In the last few months, it was announced that a roadmap for the reconciliation process is on the agenda of the government based on other examples across the world.