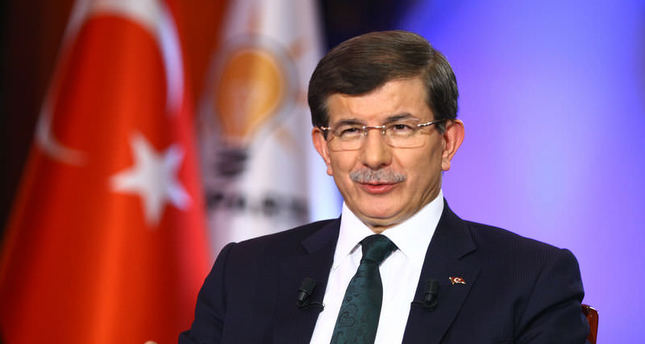 Airstrikes carried out by the Syrian regime have dramatically increased the number of refugees fleeing their homes, said PM Davutoğlu, adding that any action without a no-fly zone would legitimize the Assad regime

Prime Minister Ahmet Davutoğlu touched on the significance of the no-fly zone that Ankara has demanded be set up beyond the country's borders since the outrage in Syria and said, "A no-fly zone is a necessity because the al-Assad regime will crush Sunni regions, and 4 million refugees who may flee the region will knock on Turkey's doors." Just hours after Parliament gave the government powers to order cross-border military incursions against ISIS and to allow foreign coalition forces to launch similar operations from Turkish territory, Davutoğlu spoke in an exclusive interview aired on aHaber news channel and made striking remarks regarding the latest development and Turkey's roadmap to combat the growing Islamic State of Iraq and al-Sham (ISIS) threat. The prime minister said: "250,000 people who lost their lives at the hands of the Syrian regime, nearly 4 million refugees, 10 million displaced people, a refugee wave arriving in our country [Turkey] and radical extremisms have resulted in an authority gap, creating a [chaotic] atmosphere suitable for ISIS."

Reiterating what Ankara continuously stresses in talks with the U.S. administration, the prime minister said that the oppression in Syria would not end until a no-fly zone is set up.

Davutoğlu talked about the worst case scenario awaiting Turkey if a no-fly zone is not established: "ISIS-controlled regions will be bombed. The Assad regime's rampage is legitimized now, and he [Assad] will wait for his turn. When ISIS withdraws, the Syrian regime will shell Aleppo with all its power by taking advantage of the Free Syrian Army's [FSA] current weakness. Nearly 3 million people fleeing from the regime will move toward Anatolia."

The prime minister added that the only way to stop this scenario is a no-fly zone and gave as example the impact of airstrikes on fleeing Syrian people.

The prime minister also panned the international community and the U.N. Security Council due to their silence over the massacres in the region until Christians were faced with the ISIS threat.

Touching on the mandate that the Parliament ratified late Thursday, the prime minister said these are already existing motions and what the government has done is to update them in accordance with today's situation.

The motion, submitted by the Cabinet, received support from 298 members of the 550-seat Parliament, with 98 voting against. The ruling Justice and Development Party (AK Party) holds an overwhelming majority of 312 seats.

The parliamentary motion is not limited to battling ISIS. It includes a range of threats to Turkey's national security and was combined with another motion on the eventual deployment of Turkish forces in Northern Iraq to fight the outlawed PKK, which is listed as a terrorist group by Turkey, the U.S. and the European Union. That measure allows military incursions into Syria and Iraq against any threat to Turkey and allows foreign forces to use Turkish territory for possible operations against ISIS.

Pointing out that all options were on the table for Ankara to discuss with regard to the mandate, the prime minister said that all threats and precautions are openly clarified in the mandate and as a neighbor country of Iraq and Syria, Turkey is primarily concerned with its own national interests and strategy.

Later in his speech, the prime minister criticized main opposition Republican People's Party (CHP) leader Kemal Kılıçdaroğlu and his party's "no" vote on the mandate.

As the mandate occupied the Parliament's agenda, the CHP and pro-Kurdish People's Democratic Party (HDP) voted "no" on the mandate, whereas the far-right Nationalist Movement Party (MHP) supported the mandate despite certain reservations within the party.

Davutoğlu accused the main opposition of introducing the motion as if it was not against the ISIS threat, but against the Assad regime in Syria. The prime minister added that Kılıçdaroğlu openly implied the CHP said "no" to the mandate with an aim to keep the Syrian regime in power.

Regarding the safe zone issue that is on Ankara's agenda, the prime minister noted that the government strongly stressed the necessity of a safe zone to keep the refugee influx on the border in all international platforms.

Giving further information on how the process will work, Davutoğlu said that Turkey has a clarified strategy and that it continues to hold talks with the U.S. administration – the key actor in the anti-ISIS coalition.

The prime minister added that Turkey could not leave the fate of its friend and brother countries, Syria and Iraq, to the anti-ISIS coalition's decision-making process, in which Ankara does not participate.

Davutoğlu further noted that one year ago, the Western countries tried not including the crisis in the region on their agenda, but with the Syrian regime's chemical weapons and ISIS' capture of Mosul and the growing threat forced them to create a coalition to fight against ISIS. A U.S.-led aerial campaign was launched against ISIS targets in Iraq on Aug. 9, with the support of France, the U.K. and Belgium, along with Arab allies Saudi Arabia and the United Arab Emirates.