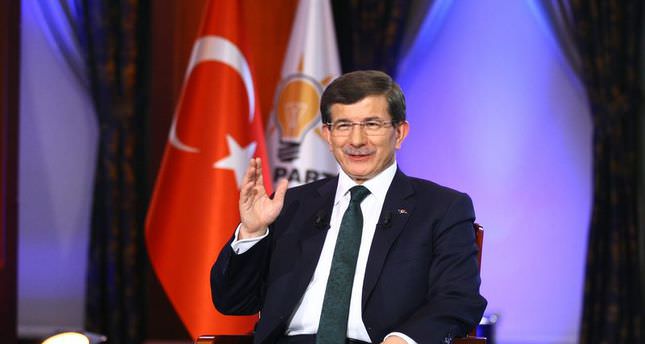 by Daily Sabah Oct 03, 2014 12:00 am
Turkish Prime Minister Ahmet Davutoğlu has said the constitutional court which issued a stay on the internet regulation that gave Telecommunications Directorate (TİB) the right to block any website within hours without first seeking a court order, is not being protective of personal rights.

Refraining from delivering a firm statement on the subject given that he did not fully read the reasoned decision of the court, Davutoğlu shared his first thoughts over the cancellation of the regulation in question. Speaking live on Ahaber, Davutoğlu said the court, while aiming to protect freedom of expression puts personal rights of individuals under risk.

Davutoğlu gave an example from his own personal life saying, he once confronted a major threat during Gezi Park Protests. "My home address was shared via Twitter along with messages that read "We will assault Davutoğlu's house" at a time when my little daughter was home alone."
Davutoğlu said he wondered how the constitutional court would protect him and his family in such threatening situation.

"What should be done during such a situation? Is it better to wait until a court reaches a decision to block a tweet, or to block it instantly by a TİB order. It is easy to play the hero here, defending the freedoms, but the constitutional court should come up with solutions that would cover every individual's rights." Davutoğlu added.

The law in question which was abolished by constitutional court on Thusday, passed parliament in Feb, 2014 amidst reactions from certain circles. The law on the regulation of Internet news portals and websites was accepted by a majority of the votes in Parliament leading to concerns over Internet freedom and people's right of access to information.

Although the new law received criticism from different actors, similar and even more restrictive practices exist in various states. For instance, in 2013, the U.S. government requested user data from Google without a warrant 11,000 times, 42 percent of the global total, followed by India with 2,700 requests. Boingo, a U.S.-based Internet company providing Wifi services at Canadian airports, also faced scrutiny after secret documents were leaked by Edward Snowden about the incident when Communications Security Establishment Canada (CSEC) collected data in an unauthorized manner from thousands of passengers who used Canadian airports.