Opposition in conflict over nationalism following approval of troop mandate 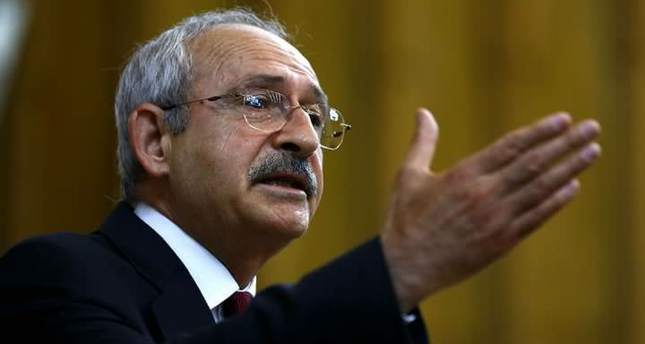 by Daily Sabah Oct 07, 2014 12:00 am
Turkish opposition parties in Parliament – center-left Republican People's Party (CHP) and far-right Nationalist Movement Party (MHP) – entered into a heated debate over nationalism following Parliament's approval of a mandate that gives the government authority to send troops to Syria and Iraq with an aim to fight against the Islamic State of Iraq and al-Sham (ISIS), which controls large tracts of land in the region and spreads fear to the entire world.

Over the weekend, CHP leader Kemal Kılıçdaroğlu harshly criticized the MHP for backing the mandate by claiming that the objective of the mandate is not to fight against ISIS, but against the Bashar Assad regime in Syria. Kılıçdaroğlu accused the MHP of not being nationalist and said, "If the MHP finds seeing foreign soldiers in Turkey suitable, I will open their nationalism up for discussion."

The mandate allowing cross-border operations caused concern in MHP deputies due to what they see as its drawbacks. However, the party voted "yes" on the mandate while it wasn't supported by the CHP and Peoples' Democratic Party (HDP).

The motive for the motion specifically cites the use of chemical weapons by the Syrian regime and increasing security risks against the Tomb of Suleiman Shah, a Turkish exclave near Aleppo in Syria guaranteed by a 1921 treaty inked with France. The late12th century tomb houses the Oghuz Turkic Suleiman Shah. The motion authorized the Turkish government to take immediate action against any group threatening the country. The motion, which is valid for one year, also includes a mandate for the government to send Turkish Armed Forces to foreign countries, namely Iraq or Syria, if necessary.

Rejecting Kılıçdaroğlu's criticism, MHP leader Devlet Bahçeli said that it is not appropriate for the CHP to be in a nationalism race with the MHP since the only level that the CHP can reach is neo-nationalism.

The MHP leader added that they backed the mandate by considering its results just like the CHP's acknowledgment of the results by not supporting the mandate.

As the parties split over the mandate, some pro-CHP groups such as the CHP youth branch in Istanbul's Beyoğlu district announced on its Twitter account that the people of Kobani, which has been under siege by ISIS, is not alone and called for demonstrations in Istanbul's Kadıköy and Beşiktaş districts – the districts in which CHP supporters are most represented.

Yesterday, a group of HDP supporters attacked the MHP's Istanbul Bağcılar district organizations and set cars around the organization on fire. There was a temporary clash between police forces and HDP supporter.

The row between the two opposition parties also served to weaken the alliance between the parties that began during the presidential election held on Aug. 10. When the CHP and MHP announced Ekmeleddin İhsanoğlu, the former secretary general of the Organization of Islamic Cooperation (OIC) as their joint presidential candidate in order to win over Justice and Development Party (AK Party) presidential candidate Recep Tayyip Erdoğan, but the alliance did not yield the desired result for the parties.

Speaking to the press amid the nationalism debate, CHP Deputy Chairman Akif Hamzaçebi told reporters that an alliance between the two parties is not possible in the upcoming national elections in 2015. Hamzaçebi said that the previous alliance was only valid for the presidential election and the CHP will continue its own fight alone.

In the past months, an allegation occupied the Turkish political agenda that an alliance between the CHP and HDP may take place for the 2015 national elections, but CHP officials strongly dismissed the allegations.