EU praises Turkey, with bumps on the road remaining 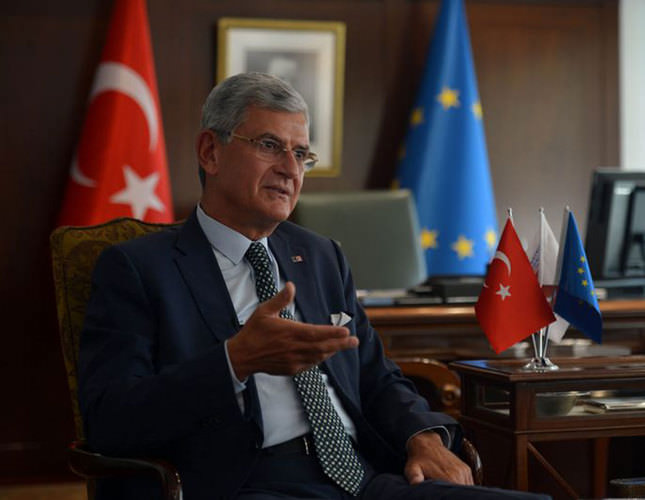 Turkey's EU Minister Volkan Bozkır made a press statement to evaluate the report and said "The 17th Progress Report is essentially objective and balanced, thanks to our contacts in Strasbourg and Brussels."

Stating the mutual need for cooperation among Turkey and the EU, "An active and credible negotiation process is the best frame to benefit from the actual potential of Turkey-EU relations," Bozkır said.

The report outlined increased dialogue environment for a solution in Kurdish or Armenian questions; along with developments as introduction of different languages in political campaigning, public aide to political parties that exceed national 3 percent threshold, native language private education and abandoning the persecution of Kurdish language characters.

According to the report, a positive mood is in effect in general and the law accepted in January would provide legal foundation needed for the process that should be supported with abandoning time-outs for unidentified murders and further legal regulations for accountability.

The report stated the need for further reforms to increase civil supervision of the military, the police, the gendarmerie and the intelligence services.

The Commission Report underlined that accession negotiations, democratization, new constitution and reconciliation process are among the main priorities of 62nd Davutoğlu government. Bozkır pointed out that Turkey has made progress in 30 of the 33 negotiation chapters.

The EU Commission praised Turkey's efforts for over 1 million Syrian refugees, stating that 220,000 of these refugees reside in 22 camps, while 580,000 others were recorded and given free health and education services.

17 December operations were also evaluated in the report, claiming that the operations and the government's response the operations caused deep concerns over the independence, neutrality and efficiency of the Turkish judiciary body.

The report stated that Turkey continues to follow national strategy for combatting corruption, however the results and the practice needs more cooperation and transparency on behalf of the Parliament and NGO's.

The EU Commission Report criticized the freedom of expression and press, claiming that the self-censorship and pressure over the media is on the rise.