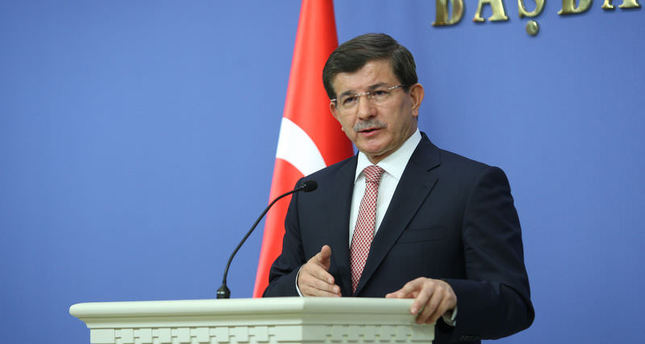 by daily sabah
Oct 09, 2014 12:00 am
Ahead of the Supreme Board of Judges and Prosecutors (HSYK) elections to be held on Oct. 12, Turkish Prime Minister Ahmet Davutoğlu called on the prosecutors and judges in Turkey to act with their conscience as Gülen Movement's infiltrators in judiciary are accused of planning to hold grip in the judiciary with the HSYK elections.

"Never let this or that group dominate the judiciary and make sure it earns public trust" said Davutoğlu addressing the judicial members.

Pointing out that there have been remarkable improvements in the field of law since the ruling party came in office, Davutoğlu stated that the reduction in the files of Turkey in the court of the UN was a proof of the reforms Turkey went through.

"The system of law should have a solid base. Trusting the judiciary is fundamental in a state. HSYK is not a place to gain power. It is a sphere of conscience. It begins to lose conscience when it aims for an authority over other fields as well." Davutoğlu said.

Current president Recep Tayyip Erdoğan, touching on illegal wiretapping of key governmental bodies by Gülen-affiliated perpetrators, stated in June that judiciary still had Gülen-affiliated judges and prosecutors in the body.

The decision to change the structure of the HSYK was first put on table after the Gülenists orchestrated Dec. 17 operation that implicated government officials as well as prominent businessmen. The operation which was believed to be led by a prosecutor close to the Gülen movement and carried out by Gülenist officers without informing the government officials, prompted the ruling party to make changes in the structure of HSYK.

Gülenists allegedly infiltrated police and judiciary with an aim to topple the Turkish government and the government hopes to clear these institutions from what they call 'traitors' in the upcoming HSYK elections.

Referring to the recent protests staged for support to Kobani -- a Syrian city facing danger of falling due to ongoing ISIS attacks-- has said the government will not give up its responsibilities with regards to retaining public order despite provocative acts.

Following his talks with the Justice Minister Bekir Bozdağ, Davutoğlu delivered statements criticizing the violent protests claiming at least 23 lives and those [HDP member] who called on people to stage protests across the country.

"Our stance towards those who attempts to cripple the public order is firm. We will never victimize the reconciliation process to vandalism." Davutoğlu said.