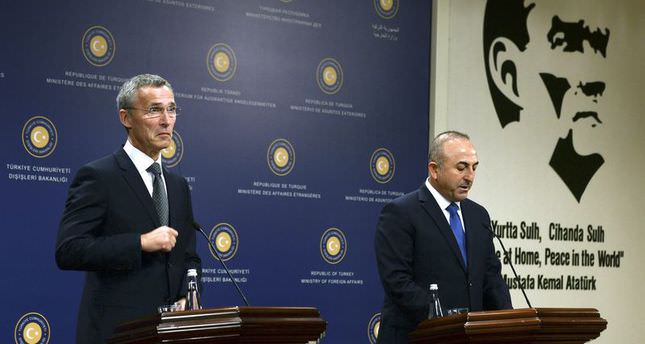 As Turkey demands a safe zone along its border, NATO and anti-ISIS coalition leaders arrived in Turkey to discuss the regional turmoil caused by ISIS. NATO’s head said the demand for a safe zone has yet to be discussed

Stoltenberg and Erdoğan held a closed-door meeting that lasted for an hour and a half to discuss the safe and no-fly zones that Turkey demands should be established on its borders as well as a ground operation against ISIS. Ahead of his talks with Erdoğan, Stoltenberg met with Çavuşoğlu in the morning prior to a joint press conference in which he said NATO had not discussed Turkey's safe zone demand yet.

During the press conference, Çavuşoğlu said it was not "realistic" to expect Turkey to embark on a military operation in the war-torn region on its own, as talks with allies concerning the situation with ISIS are still ongoing.

"Once a [collective] decision has been taken, Turkey will not be reluctant to do its part," he said.

When asked about Turkey's demand for a safe and no-fly zone, Stoltenberg said that the issue has yet to be discussed by NATO.

Underscoring that the issue was discussed in the meeting with Çavuşoğlu, Stoltenberg said, "I believe there is no simple and straightforward way out of the problems we are seeing."

When asked about Turkey's proposal for a safe haven and no-fly zone over Syria, Stoltenberg said, "It has not been on the table of any NATO discussions yet and it is not an issue which is discussed in NATO."

Stoltenberg added that he welcomes what Turkey is doing in receiving refugees and its passing of a mandate to authorize Turkey to take a more active role in the coalition.

Çavuşoğlu also reiterated the importance of establishing a no-fly and safe zone in Syria near the Turkish border, which are priorities if Turkey is to take part in an international coalition against ISIS in Iraq and Syria, and said that true peace can never be restored in Syria without the departure of "[Bashar al-]Assad and his regime."

He said that the current U.S.-led airstrikes against ISIS would not be enough to bring peace to Syria and a ground operation in coordination with anti-ISIS Syrian rebels should be considered.

"Airstrikes can reverse the balance of power and stop ISIS but will not be enough to eradicate ISIS from the region," Çavuşoğlu added.

"Therefore, all other options including a ground operation should be considered and the Free Syrian Army should be supported," he said.

On Wednesday, the U.S. and U.K. said that they are willing to "examine" the idea of setting up a buffer-zone along Turkey's border with Syria, according to their top diplomats.

"The buffer-zone […] is an idea that's out there, it's worth examining, it's worth looking at very, very closely," U.S. Secretary of State John Kerry told reporters, but the White House on the same day denied it was planning to create a buffer-zone along Turkey's border.

"We'd have to explore with our other allies and partners what is meant by a buffer-zone and how such a concept would work. But I certainly wouldn't want to rule it out at this stage," he said.

French President Francois Hollande also held a phone conversation with Erdoğan on Wednesday. Following their talk, an official statement was issued on the website of the French president saying that France supports the idea of setting up a buffer-zone between Turkey and Syria to create a safe haven for refugees.

Retired U.S. General John Allen, who is in charge of building the U.S.-led coalition to fight ISIS, arrived in Turkey to hold talks with Brett McGurk, a U.S. official working with Iraq, on Thursday and Friday amid battles for the Kurdish border town of Kobani in Syria. Allen held talks with Erdoğan and Çavuşoğlu as well.