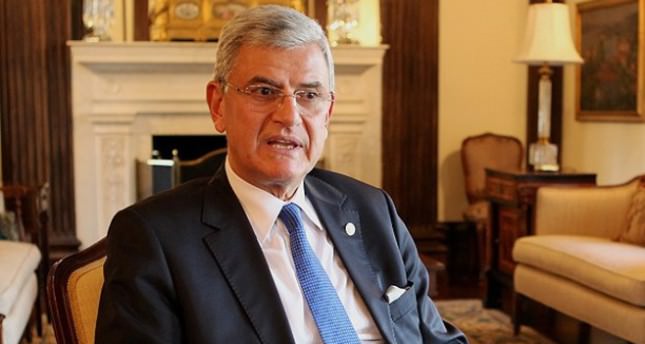 Turkish EU Minister and Chief Negotiator Volkan Bozkır, who evaluated the EU's 2014 report for Turkey, said the report is "balanced and objective in general."

"We will continue to benefit from the Progress Report as a constructive tool for Turkey's progress in the EU accession and reform process," he said

"Those areas that have been criticized in previous Progress Reports for years are now being praised. Besides the reforms, Turkey's economic and foreign policy performance of the past 10 years have also been reflected in the report."

According to the EU minister, the report underlines that Turkey is a key actor in its region.

Bozkır also stated that regional and global challenges better reveal the value of the accession process both for Turkey and the EU.

"Turkey will make significant contributions that will make the EU to be more powerful, secure and wealthier," added Bozkır.

The report outlined the increased dialogue environment for a solution to the Kurdish question along with developments, such as the introduction of different languages in political campaigning, public aid to political parties that exceed a national 3 percent threshold, native language private education and abandoning the persecution of Kurdish language characters.

According to the report, a positive mood is in effect in general and a law accepted in January would provide the legal foundation needed for the process that should be supported with abandoning time-outs for unidentified murders and further legal regulations for accountability.

The report stated the need for further reforms to increase civil supervision of the military, the police, the gendarmerie and the intelligence services.

The EU should expand its accession negotiations with Turkey to cover rule of law issues, the bloc's top official for enlargement said Wednesday, while expressing concern over democratic shortfalls during the past year.

"I continue to advocate for the start of formal negotiations in the area of the rule of law as soon as possible," said EU Enlargement Commissioner Stefan Fule in a statement he posted on Twitter.

Fule was due later Wednesday to present the EU's latest assessment of progress made by all seven EU membership hopefuls to fall in line with the bloc's norms.

Turkey's brief ban on the use of Twitter earlier this year "raises serious concern in any democratic society," Fule added.

At the same time, he praised Ankara's ongoing efforts to settle a longstanding dispute with its Kurdish minority. "A historic process has now started, raising hopes of putting an end to the deadly cycle of violence," Fule wrote. Turkey has been seeking to join the EU for 27 years, but negotiations have frequently ground to a halt, mostly due to Franco-German opposition and tensions with Cyprus.

The bloc has so far opened 14 of 35 accession chapters with Turkey, but these do not include controversial Chapters 23 and 24, which cover issues of justice, fundamental rights, freedom and security.

But the European Commission's next president, Jean-Claude Juncker, has said that he does not expect the EU to gain any new members during his five-year term, which is slated to begin in November.