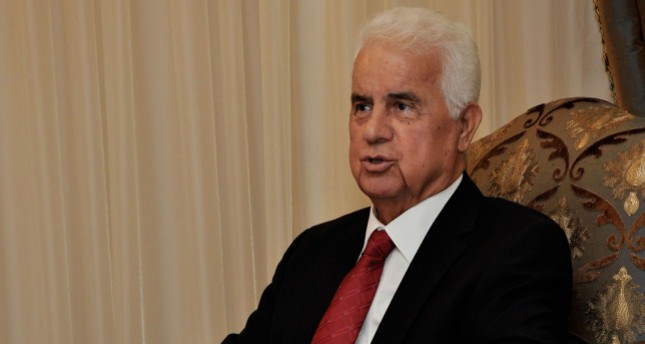 by Emre Diner Oct 09, 2014 12:00 am
Turkish Cypriot President Dervis Eroğlu has removed his side's negotiator, Kudret Özersay, because of the latter's intention to run for leader of the breakaway state. Özersay had announced his intention earlier this month in an interview with Daily Sabah. He said he was motivated by the desire to show courage and a real will to make changes.

A U.N. official said the spat between Greek Cyprus and Turkey over natural gas that saw the Greek Cypriot side pull out of reunification talks was a serious issue as he urged the sides to avoid further escalation.

"And I think it's very important now that everybody acts responsibly and avoid further escalation and that we as soon as possible create an understanding that the oil and gas resources, as President [Nicos] Anastasiades has repeatedly stated, is for all Cypriots," U.N. special adviser Espen Barth Eide told reporters after meeting Anastasiades, president of Greek Cyprus, on Wednesday morning.

"It's a serious issue that we also see in all parts of the world when you have maritime disputes, it illustrates one of the points that I have raised earlier in my presence here, which is that oil and gas can be either a blessing or curse. If it is well managed it will be a source of wealth for all Cypriots, if it becomes a source of tension it will be a problem for everyone and then it will be more of a curse than a solution."

Anastasiades pulled out of talks with Eroğlu on Tuesday in response to Turkey's announcement that it was reserving areas for seismic surveys south of the island and within Greek Cyprus' offshore territory.

Anastasiades expressed deep regret that he was compelled, due to developments, to suspend his participation in the U.N.-led peace talks, aiming to reunite Cyprus, divided since the 1974 Turkish invasion. In a written reply to a statement by Eroğlu on the matter, Anastasiades assured Turkish Cypriots that he remains committed to finding a negotiated settlement and to working with all his strength to achieve this goal.

Anastasiades reiterated that the natural wealth of Greek Cyprus belongs to the state and the achievement of a solution will help so that the entire population of Cyprus will benefit on the basis of population ratios.

Eroğlu told Daily Sabah that he warned the Greek Cypriot leadership to take Turkey's warnings seriously on the issue of hydrocarbon drilling and exploration activities.

Eroğlu said, "We have warned them since the [Demetris] Christofias period, but they continue to proceed without listening to us," and added that the Turkish Cypriots' partnership right applies to all undersea resources as well. On Tuesday Anastasiades suspended talks on reunifying the divided island in response to Turkey's plan to search for oil and gas in waters where Greek Cyprus had already licensed drilling. In the article, Eroğlu said he proposed a joint committee to Anastasiades on the issue of natural resources during the negotiation process. Eroğlu said that his proposal was rejected. Eroğlu gave the following reply to Anastasiades, who said that the talks may be suspended in the case Turkish ships are sent to the drilling area: "We support the continuation of the negotiations. However, if you give an end to this, we don't have objections. The continuation of the attempt to unilaterally exploit the undersea resources while the negotiations are going on is not a well-intentioned approach. As we always say, if you take a step, we will also take a step. Now they take their second step and we will also take a step. It is a mistake to think that Turkey and we will remain silent."