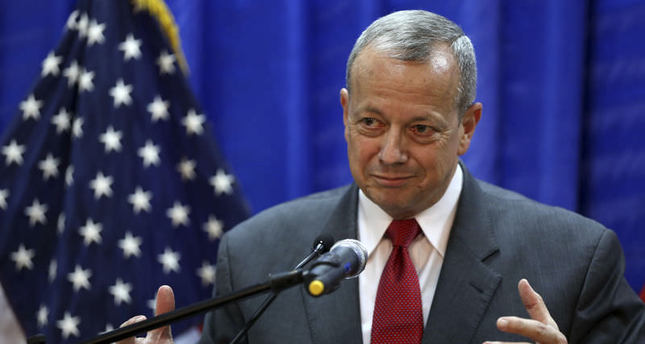 by Anadolu Agency Oct 09, 2014 12:00 am
Gen. John Allen, the U.S. special envoy for the anti-ISIS U.S.-led coalition, and his deputy, Ambassador Brett McGurk, have arrived in Ankara today for a two-day visit to meet with Turkish officials, the media reported on Thursday.

The meetings will reportedly address "basic logistical questions" regarding Turkey's role in the coalition.

White House spokesman Josh Earnest earlier said the US was concerned about Kobani and coalition air strikes were being stepped up round the city.

He said Allen would discuss Turkey's "unique capabilities to benefit this broader coalition" in Ankara.

Who is John R. Allen?

John R. Allen, born in December 15, 1953, is a United States Marine Corps four-star general. He was the nominee to be NATO's Supreme Allied Commander, Europe in early 2013. However, he decided not to take up the assignment and announced his retirement from the military, citing family reasons. His final assignment was as commander of the International Security Assistance Force and U.S. Forces Afghanistan (USFOR-A) from July 2011 to February 2013. On 13 September 2014, The United States appointed General Allen as Special Presidential Envoy for the Global Coalition to Counter ISIS (self-proclaimed Islamic State of Iraq and al-Sham). He received many awards during his carreer.