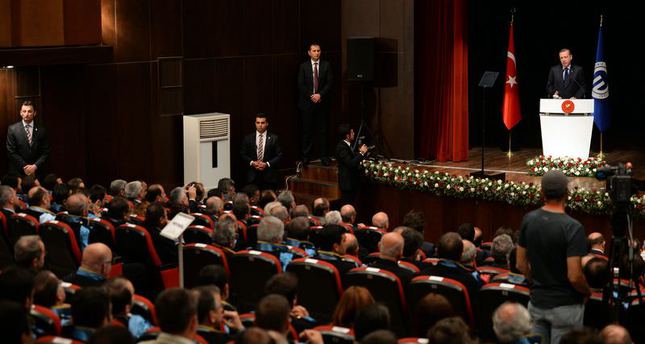 President Erdoğan on Friday announced that to take part in a comprehensive military operation against ISIS, Turkey has three demands: a no-fly zone, safe zone and training and assisting the Syrian opposition

Turkish President Erdoğan listed what Turkey's demands from the anti-ISIS coalition, led by the U.S.: a no-fly zone on Turkey's border with Syria, a safe zone along the border and training and assisting the moderate Syrian opposition. In a speech in Trabzon, Erdoğan said if these demands are met Turkey will join the comprehensive military ground operation against ISIS. "But, if these demands are not met, we do not intend to take a role in [the operation]," Erdoğan said, reiterating that the Assad regime must fall in neighboring Syria and Turkey is the focus of a direct threat from ISIS. Since the outbreak of the regional chaos, Turkey has opened its doors to more than 1.5 million refugees fleeing both the Syrian civil war and ISIS, who have spread fear across the entire region.

Ankara has demanded a safe zone to be established along its borders. In the last few days, this demand, supported by France, which is the second prominent anti-ISIS coalition member after the U.S., when Erdoğan and French President Francois Hollande held a phone conservation. Following the announcement coming from Hollande's official website, the U.S. and U.K. on Wednesday said that they are willing to examine the idea of setting up a buffer-zone along Turkey's border with Syria, according to their top diplomats. However, the White House on the same day denied it was planning to create a safe-zone along Turkey's border.

Retired U.S. General John Allen, who is in charge of the U.S.-led coalition to fight ISIS, arrived in Turkey to hold talks with Brett McGurk, a U.S. official working with Iraq, on Thursday and Friday amid battles for the Kurdish border town of Kobani in Syria. Allen also held talks with Erdoğan and Foreign Minister Mevlüt Çavuşoğlu and according to presidential sources the demand for a safe zone was the main item on Turkey's agenda during the talks.

Also, Prime Minister Ahmet Davutoğlu has recently touched on the significance of the no-fly zone that Ankara has demanded be set up beyond the country's borders since the onset of violence in Syria saying, "A no-fly zone is a necessity because the Assad regime will crush Sunni regions, and 4 million refugees who may flee the region will knock on Turkey's doors."

Davutoğlu talked about the worst case scenario awaiting Turkey if a no-fly zone is not established: "ISIS-controlled regions will be bombed. The Assad regime's rampage is legitimized now, and [Assad] will wait for his turn. When ISIS withdraws, the Syrian regime will shell Aleppo with all its power by taking advantage of the Free Syrian Army's [FSA] current weakness. Nearly 3 million people fleeing from the regime will move toward Anatolia."

The prime minister added that the only way to stop this scenario is a no-fly zone and gave as example the impact of airstrikes on fleeing Syrian people.