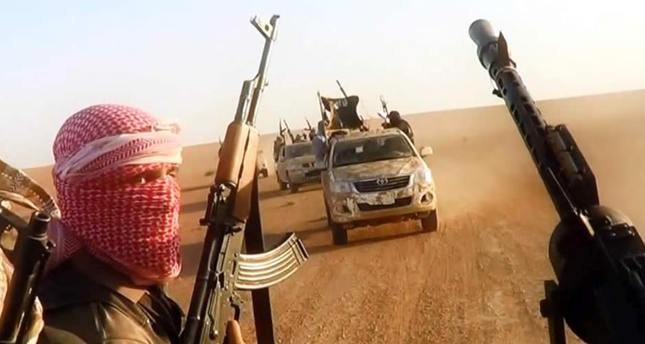 by Daily Sabah Oct 10, 2014 12:00 am
A recent study in which the phenomenon of foreign fighters was analyzed by the SETA Foundation indicated that despite the misperception of Turkey's alleged support for extremist groups in Syria sourced by the difficulty in border security, there are different motivations for fighters to join extremist groups in the Syrian civil war.

In the report "The Making of European Foreign Fighters" on Wednesday, issue of foreign fighters, which became a hotly debated topic, especially after the Islamic State of Iraq and al-Shams's (ISIS) recent advances, is examined in detail. While the motivations for joining the three-year-long civil war and common characteristics of joint foreign fighters are explained, Turkey's position in this flow of fighters also took part in the study.

For the report, the huge change in the perception of Western countries and their media outlets toward Syrian opposition factions brought the question whether Turkey has been backing extremist groups in the Syrian civil war. In the report it is said: "As a strong supporter of Syrian opposition-especially of FSA-for Turkey (sic), the flow of foreign fighters into Syrian war theatre (sic) at first was not a security issue or political problem," and added "however with the ISIS expansion in north Syria and the growing salafi-jihadi (sic) influence in the opposition ranks, the U.S. and European governments' threat perceptions regarding Turkey's role have changed."

The report says that Turkey took measures to secure its border against the flow of foreign fighters such as sending more than 1,000 potential European rebel fighters back to their countries by the end of 2013 and the Turkish Army's hitting an ISIS convoy in early 2014. But nevertheless, it is underscored in the study that securing the 911-kilometer border is a quite difficult issue for two reasons: Turkey's no visa policy for Syria and some national and international aid groups in which a potential for foreign fighters is found.

The report said that "[…] in case a British citizen-who is not prevented by British authorities from travelling to Turkey-wants to join the Syrian rebels, s/he would face almost no obstacles thanks to his/her nationality and the relevant visa regime, certainly an encouragement in addition to the relevance of other motives in joining the ranks." It added: "[…] there are many national and international aid groups and organizations which might include potential foreign fighters desperate to get on the ground in Syria to fight. Many of them straddle the Turkish border because being a volunteer for an aid organization can hardly be a crime either. It is often not possible to stop someone leaving his/her aid convoy beyond the border before joining the rebels."

It is underlined in the study that the main cause in the recruitment of foreign fighters is by the aspiring fighters' being motivated by images and videos on social media sites. The report gives an anecdote: "An adviser to the French government Mathieu Guidere seems also of the same view thinking that gruesome images and videos from Syrian conflict (sic) available on the Internet have a mobilizing impact on the young French citizens (sic). This helps to explain why such extremist groups as ISIS are very active on the social media"

The motivation of "hypergood" by "helping the oppressed people against the unjust by establishing an alternative polity through use of force" in Syria, is also seen as another reason for the flow of fighters in the study.