US senators agree with Erdoğan that Assad must go 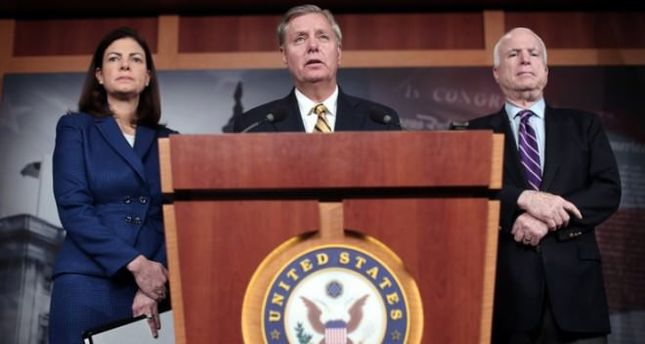 by Daily Sabah Oct 10, 2014 12:00 am
Two Republican U.S. Senators, John McCain and Lindsey Graham, released a statement on Thursday saying they agree with Turkey's strategy on the Islamic State of Iraq and al-Sham (ISIS), claiming that the Bashar al-Assad regime in Syria must fall for the extremist group to be destroyed in the region. "The growing criticism of Turkey for not acting to save Kobani does not reflect the reality on the ground that both ISIS and Bashar al-Assad must be defeated," the statement read.

The senators said Turkey should play a greater role in the fight against the militant group and added that they have disagreed in recent years with some of Turkey's policies and actions in the Middle East, especially on Israel and the management of its border with Syria.

"In this instance, however, President Erdoğan has said that we need an international strategy, not just to destroy ISIS, but also to force Assad to leave power and end the conflict in Syria – for the former objective cannot succeed without the latter. This strategy, Erdoğan has said, must include the establishment of safe zones in Syria for civilians and opposition forces, protected by no-fly zones – a strategy we have long advocated and continue to believe is vital to success in both Syria and Iraq," the statement said.

The statement further added that U.S. President Barack Obama should adopt a strategy in line with the Turkish government's argument that indicates the solution to end the ongoing conflict in Syria can only be established through Assad leaving power.

"This view is shared by many of our friends and allies in the Middle East. We are confident that if President Obama adopted a strategy and took the steps that Turkish leaders are advocating to deal with Assad as well as ISIS, he would have significant support from our regional partners, including Turkish military involvement, which can be so important to success."

Ankara has vehemently opposed Assad during the three-and-a-half-year Syrian war but has been criticized for not showing greater involvement in the fight against ISIS extremists. Turkey has been reluctant to intervene militarily against ISIS extremists trying to take the Kurdish town of Kobani just across the border despite having parliamentary authorization for military action in Syria.