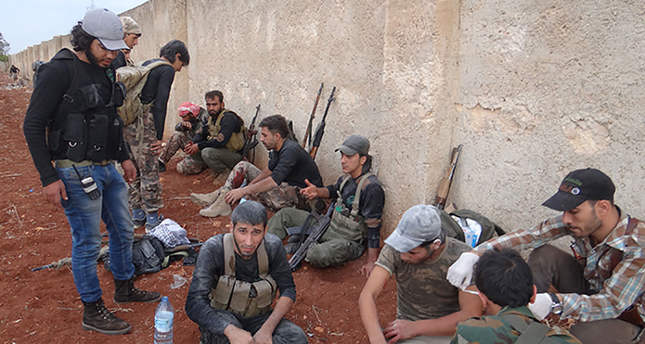 With the "train and equip" agreement, Turkey's position in the anti-ISIS coalition is becoming clearer. Calling for a comprehensive military operation against ISIS, Ankara has determinedly demanded that the only way it will take part in a military action is to meet its requirements of establishing a no-fly zone and safe zone and to train and equip the Syrian opposition. As the first step, Turkey and the U.S. agreed to train and equip the Syrian opposition. According to government sources, a committee for military planning is scheduled to arrive in Turkey and a definite time schedule for training and equipping Syrian rebel groups is expected to be discussed this week.

The duty of training the Syrian opposition was given to the Turkish National Intelligence Agency (MİT). The first step of training will include 2,000 moderate Syrian fighters and Turkey aims to carry out the training in five secure zones still to be established along the border. If the secure zone option is postponed, the training may be held at a secure base in Turkey. A comprehensive security investigation of Syrian opposition groups to be trained is a must for Ankara if moderate Syrians have to be trained within the country's borders. Turkey wants Muslim countries in the anti-ISIS coalition to be included in training the Syrian opposition and drew a red line not to train and equip Democratic Union Party (PYD), the Syrian affiliate of the PKK, and its armed People's Protection Units (YPG).

"But, if these demands are not met, we are not intending to take a role in [the operation]," Erdoğan said, reiterating that Turkey is a neighboring country to war-ridden Syria and is the focus of a direct threat that may possibly come from ISIS.

Last week's talks between Turkish officials, anti-ISIS coalition head U.S. Gen. John Allen and NATO chief Jen Stoltenberg, who arrived in Turkey on the same day for a two-day visit, yielded the agreement to train and equip the opposition.

Turkey is prepared for a possible influx of refugees that may begin after the Syrian opposition starts its attacks in the troubled region, so Ankara want a safe zone to be established before a military operation takes place.

Turkish soldiers may take over the responsibility of a safe zone to be established to more easily deliver humanitarian aid to civilians.

While talks between Turkey and the U.S. on establishing a no-fly and safe zone is continuing, France, which is the second prominent country in the anti-ISIS coalition after the U.S., announced that it supported Turkey's demand for a safe zone last week. U.S. Secretary of State John Kerry described a no-fly zone as worth examining while Hagel has shown little enthusiasm for the idea.

Continuing to push for its demands in exchange to take part in military action, Ankara called for a comprehensive strategy and said that airstrikes will not yield the expected results in the fight against the ISIS.

Prime Minister Ahmet Davutoğlu also echoed Ankara's sentiments about the other two ways to restore peace in Syria. The first way is for the international community to deploy army ground forces in the region, Davutoğlu said, pointing out that Turkey will not enter Syria by itself. In case of a national security threat or an attack on the Tomb of Süleyman Shah, however, Turkey will not be hesitant to take all kinds of measures, Davutoğlu stated.

The second way according to Davutoğlu is to hit Syria with airstrikes, but such a strategy is not effective.

There is a need for an integrated political-military strategy in the region, according to Davutoğlu. He called out to the international community: "Let us all establish this strategy."

"If there is an integrated strategy, we will also contribute to the solution," Davutoğlu said. "We cannot just sit and watch the process."