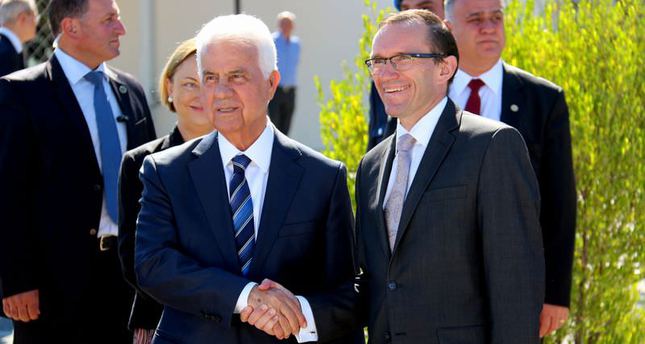 In an interview with Daily Sabah, Greek Cyprus’ Spokesperson Nicos Christodoulides said, when a permanent solution is brought to the divided island, both Turkish and Greek sides can cooperate on projects in the energy field

In an interview with Daily Sabah, Greek Cypriot government spokesman Nicos Christodoulides said the Greek Cypriot administration was left with no choice but to suspend its participation in talks.

"Hydrocarbon work did not begin anew on the island. However, this is the first time Turkey has used Navtex [to track Greek Cypriot ships]. So that is where drillings of natural gas exploration has been announced in the area. This was a first for Turkey. Due to this attitude by Turkey, we have suspended negotiations," Christodoulides said.

Christodoulides echoed Greek Cyprus President Nicos Anastasiadis' sentiments that when this issue is solved, the entire islander will benefit from this project and added that after a solution is found both sides can cooperate on energy field projects.

Last week, the Greek Cypriot administration announced that it had suspended talks on reunifying the ethnically divided island in response to Turkish plans to search for oil and gas in waters where the Greek Cypriot government has already licensed companies to drill.

Underscoring that the Greek side had not finished negotiations, only suspended them, Christodoulides said that during the drilling operations in the southern part of the island, they frequently informed Turkish Cypriots of their decision.

Regarding the British base on Cyprus and the Islamic State of Iraq and al-Sham (ISIS) threat in the Middle East, Christodoulides clarified Greek Cyprus' stance on the fight against ISIS. He said, "[Greek] Cyprus is committed to fight against ISIS and continues to support the allied [anti-ISIS coalition] countries in their fight." He also said that the base is not to attack, but to share information with the U.K. "We are required to share information. All countries in the region face the ISIS threat. Turkey, Lebanon, Syria, Egypt and Cyprus are faced with this threat," Christodoulides added.

When asked whether he would like to give a message to Turkey following the suspension of negotiations, he said: "We cannot change geography. Turkey and Cyprus will always be good neighbors. We would like to cooperate with Turkey, and we are also ready for it. My message to Turkey is: We can solve this problem. Let's benefit from the beauty of the region. We have much to do."

Highlighting that reviving the negotiations is in the hands of Turkey, Christodoulides said that Greek Cyprus wants Turkey to change its attitude to continue the negotiations. "Hopefully, we can live together on this beautiful island."