Erdoğan: Wiping out ISIS not enough, Assad the real target 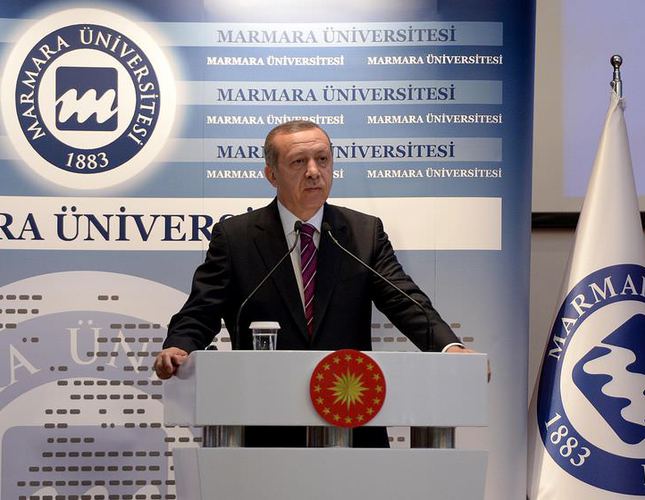 Efforts to destroy the threat posed by the Islamic State of Iraq and al-Sham (ISIS) is not enough, said President Recep Tayyip Erdoğan yesterday, adding that the Assad regime annihilating towns like Kobani every day should also be targeted. Erdoğan also said that Turkey would continue the fight against ISIS but was careful not to fall into traps and had demands from the U.S., including a no-fly zone and a safe zone.

In an address from Istanbul's Marmara University, Erdoğan reiterated the necessity of forming a no-fly zone and a safe zone in Syria, along with continuing the U.S.-led international airstrikes on ISIS targets in northern Syria.

ISIS is currently advancing on the town of Kobani resulting in the fleeing of around 200,000 Syrian Kurds into Turkey over the last three weeks. The armed People's Protection Units (YPG) of an offshoot of Turkey's outlawed PKK are continuing their fight against ISIS but are outmatched in number and technological capacity.

"Syria has many Kobanis. What will happen to Aleppo, Latakia, Turkmens and other people after saving Kobani? The Assad regime should be the target for a real solution in Syria," Erdoğan said, noting that the regime is responsible for the killing of 250,000 people in Syria.

"A no-fly zone and a safe zone should be built so we can be able to place the Syrians inside our country at these safe havens," he said.

"Also, the moderates should be trained and equipped either in Turkey or inside those safe zones so they can be able to conduct their war against the regime."

He also criticized the PKK's claims that the Turkish government was doing nothing to halt the advance of ISIS in Kobani, which sparked last week's protests in which 34 people died.

He also criticized the leftist Peoples' Democratic Party (HDP) for its call to the people to take to the streets in support of Kobani.

Erdoğan said "the artificially-made" borders in the Middle East drawn by the imperial powers after the end of World War I are the real cause of the long-term pain and crisis in the region.

He said "there should be no borders between Middle Eastern countries in the minds and hearts of the people," and noted that Turkey should do its own part in fighting with sectarianism, racism and all other divisions in the Middle East.

"Turkey is the only country that can provide peace in the region. Turkey is the hope of Middle Eastern people. Turkey can remove the barriers between Middle Easterners, not by changing physical borders, but by instilling hope and trust," he said.

Reiterating that Turkey has three demands from the U.S., including a no-fly zone, safe zone and training and equipment for Syrian opposition groups on which the countries agreed, Erdoğan said, "We'll continue to fight ISIS but we won't fall into traps. We have demands."

"Why do Sunnis and Shiites clash? I openly tell you why. It's because those who drew the map wanted it like this."