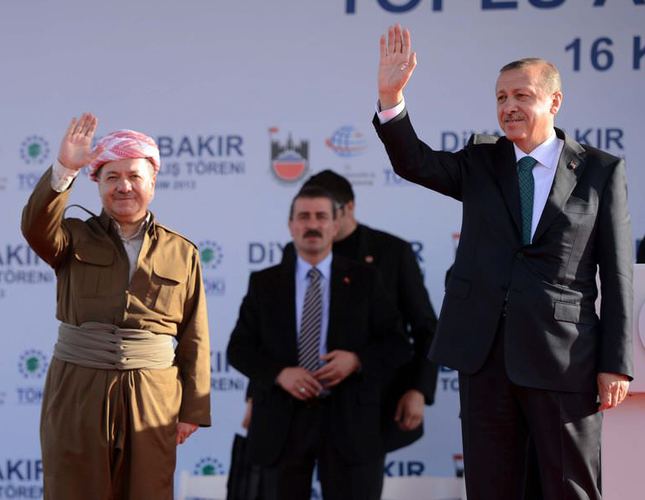 KRG President Barzani stated that Turkey provided arms while the Kurdish town of Irbil was under ISIS threat in June, but did not want to disclose this information as ISIS held 49 of its citizens hostage at the time

Speaking to Sky News Arabic on Monday, Barzani announced that the KRG administration had received arms support from Turkey but kept it confidential as ISIS militants where keeping hostage 49 employees from the Turkish Consulate in Mosul, Iraq.

"We have to tell the truth. On the first night we were attacked by ISIS, Iranians sent two planes loaded with arms. That was a remarkable assistance for that moment. [Arms support] had been sent by others as well. However, the first was from Iran. We were actually expecting Turkey to make the first move. They also sent us [arms] but they wanted us not to say it due to interior conjuncture. Their presidential election was coming at that time and ISIS had taken Turkish hostages," Barzani said.

Barzani went on to express understanding toward Ankara's current caution toward further involvement in Syria and Iraq saying, "We were expecting a stronger stance than the one we saw from Turkey. That they would act faster and send more arms. But alongside our expectations, we understand their concerns."

KRG leader also said, "We understandingly knew that Turkey's delayed and careful stance was due to internal issues and the hostage crisis. However it must be said that Turkey helped out as well."

Barzani said he sees Turkey as a friend and that it would not stand against the development of the autonomous Iraqi Kurdish region. When asked about Turkey's position against the possible independence of the KRG, he said, "Independence is a separate subject and I actually don't know what the final decision by Turkey or other countries will be. However, we continue to have good relations with Turkey."

Unlike Turkey's pro-Kurdish politicians accusing Ankara of its position, Barzani said there is no such evidence showing Ankara supported ISIS in any way.

KRG Prime Minister Nechirvan Barzani visited Turkey last month and held talks regarding the ongoing ISIS crisis in Iraq and Syria. He talked about the accusations against Turkey, saying, "Turkey certainly did not support ISIS against Kurds or the Kurdish government. We believe that it is slander. Turkey is our important neighbor and has always helped the Kurdish region," he added.

Despite calls from both the president and prime minister to not use provocative language when covering the hostage crisis, some media outlets constantly questioned why government officials restrained from calling ISIS a terrorist organization. The movement subsequently drew the ire of people for putting the lives of captive Turks in jeopardy. Following the release of the hostages, President Recep Tayyip Erdoğan said that Turkey was ready to lend military support to the coalition against ISIS, which he described as a "bloody terrorist organization."