Turkey, US discuss use of bases in campaign against ISIS 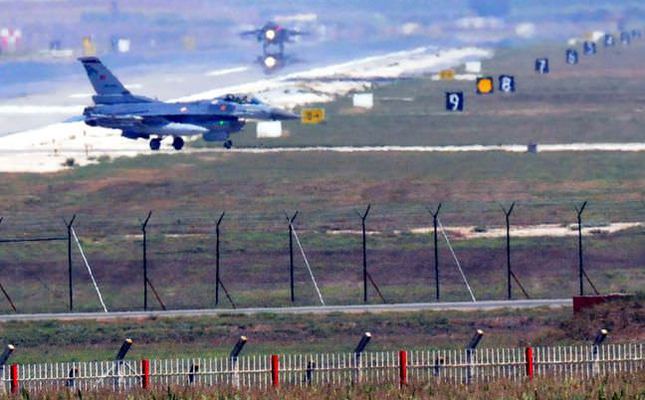 by Sena Alkan Oct 13, 2014 12:00 am
U.S. defense officials and National Security Advisor Susan Rice said Sunday that U.S. and coalition forces could soon be using military bases in Turkey including the İncirlik base, a key installation within 100 miles of the Syrian border, for operations against the Islamic State of Iraq and al-Sham (ISIS), which controls large swathes of the region. Foreign Ministry spokesman Tanju Bilgiç, who is in New York to hold talks with U.S. officials, said a deal has not yet been reached between Washington and Ankara on the use of the İncirlik Air Base in southern Turkey for attacks against ISIS, but talks with the U.S. are continuing.

Government officials, speaking to Daily Sabah, said that there are no new developments in the talks over the use of the İncirlik base, but talks over the details of "train and equip" programs are ongoing.

Noting that both sides are continuing their talks at full steam, Kalın said that all details regarding future actions, including a no-fly zone and a safety zone for refugees, are on the agenda.

As Turkey starts to take an active role in accordance with the coalition's action plan against the militants in the region, the U.S. which is leading the coalition, and Turkey continue to improve their cooperation in the coalition to fight ISIS.

According to government sources, the U.S. demanded the use of Turkish bases, including İncirlik in Adana, and three other bases in the southeastern cities of Batman, Diyarbakır and Malatya. The sources claimed that except for the base in Malatya, which the U.S. wants to use for support, the other bases are to be used for active operations against ISIS. Even though there has been some progress in continued talks, Turkey has some reservation regarding the use of its bases.

In addition to the İncirlik base that is of utmost importance due to its location, the bases in Diyarbakır and Malatya also have critical significance to Turkey in terms of controlling the country's airspace. Both of the bases have two landing fields.

Over the weekend the countries agreed to train and equip moderate Syrian opposition groups as the first step in talks. As part of the agreement, a joint U.S. Central Command-European Command planning team is scheduled to arrive in Turkey and a definite time schedule for training and equipping Syrian rebel groups is expected to be discussed this week as Ankara pushed its demands for a safe and no-fly zone.

According to government officials, the duty of training the Syrian opposition was given to the Turkish National Intelligence Organization (MİT) and 2,000 Syrian fighters, including mostly Turkmens and those having sympathy for Turkey, will be trained in Turkey. Since the training and equipping are to be carried out within Turkish borders, a high security monitoring of moderate Syrian fighters to be trained is scheduled by the MİT to ensure that the fighters will not turn their arms against Turkey in the future.

In a phone call to Turkish Defense Minister İsmet Yılmaz, U.S. Secretary of Defense Chuck Hagel thanked Ankara for its willingness to contribute to the coalition's efforts and to host and conduct the training of Syrian opposition members as his spokesman Rear Admiral John Kirby said.

"Hagel noted Turkey's expertise in this area and the responsible manner in which Turkey is handling the other challenges this struggle has placed upon the country, in terms of refugees and border security," Kirby added.

Turkey is prepared for a possible influx of refugees that may begin after the Syrian opposition starts its attacks in the troubled region so Ankara wants a safe zone to be established before a military operation takes place.

The position of moderate Syrian groups toward the Bashar Assad regime is an essential determinant for Turkey since Ankara underscored that to cleanse the region of terrorist organizations, including ISIS, the Assad regime must be ousted.

"Both men also agreed that the Assad regime has, through its own brutality, fostered the current crisis and long ago surrendered any legitimacy to govern in Syria," underscored Kirby.