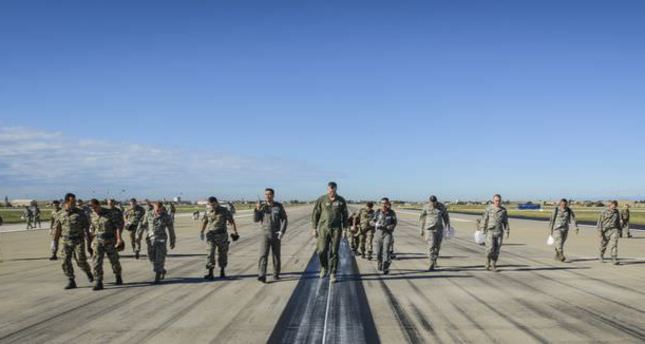 by Oct 13, 2014 12:00 am
Turkey has granted the United States access to its air bases for the campaign against ISIS, including a key installation near the Syrian border, a senior US defense official said Sunday.

"Details of usage are still being worked out," the official told AFP on condition of anonymity.

In southern Turkey, US crews have long operated out of Incirlik Air Base and about 1,500 airmen are stationed there.

US aircraft bombing ISIS militants in Iraq are reportedly flying out of al-Dhafra Air Base in the United Arab Emirates, Ali al-Salem Air Base in Kuwait and al-Udeid Air Base in Qatar, which is also home to a vital US air combat command center for the region.

At the Combined Air Operations Center (CAOC) in Qatar, US officers oversee airspace authority, air defenses and electronic warfare in 20 regional countries. The Qatar air base, with a 15,000-foot runway and a significant supply of munitions, is a crucial logistical hub.

US F-16 fighter jets also have been stationed in Jordan since last year and the Pentagon has basing agreements with Oman. In addition, the US military can use a base in Diego Garcia for B-52, B-1 and B-2 flights.

During a telephone call with Turkish Defense Minister Ismet Yilmaz, Pentagon chief Chuck Hagel thanked Turkey for its "willingness to contribute to coalition efforts, to include hosting and conducting training for Syrian opposition members," his spokesman said.

Hagel "noted Turkey's expertise in this area and the responsible manner in which Turkey is handling the other challenges this struggle has placed upon the country, in terms of refugees and border security," Rear Admiral John Kirby added.

Earlier, Turkish Prime Minister Ahmet Davutoglu called for military backing for Syria's "moderate opposition" to create a "third force" in the war-torn country to take on the Damascus regime as well as ISIS militants.

The call comes as Turkey faces international pressure to step in to defend the mainly Kurdish Syrian border town of Kobane from ISIS militants.

The Turkish parliament this month gave the government the green light to take military action against ISIS in Iraq and Syria but Turkey's military has yet to make a move.

Following growing criticism over Ankara's perceived failure to intervene in Kobane, the United States on Friday reported "progress" in pressing Turkey to participate in the fight against ISIS.

During the call with his Turkish counterpart, Hagel also noted that Ankara had agreed to host a joint US Central Command-European Command planning team next week in order to "further develop a training regimen," Kirby said.

"Both leaders stressed the need to continue taking a comprehensive, strategic approach to the threat posed by ISIL and other extremist groups," the statement added, using another acronym by which ISIS is known.

"Both men also agreed that the Assad regime has, through its own brutality, fostered the current crisis and has long ago surrendered any legitimacy to govern in Syria."