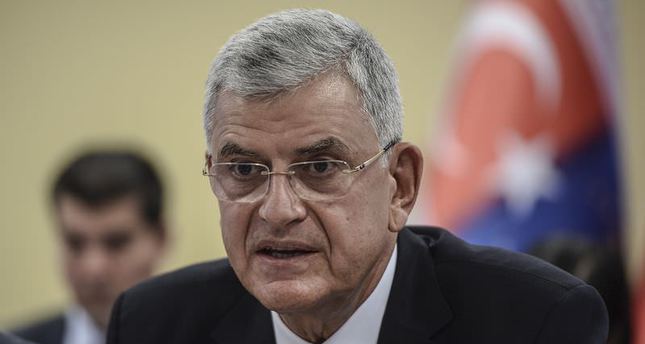 by AA
Oct 14, 2014 12:00 am
Turkey and Germany have agreed that reviving EU accession talks of Turkey is in the interest of both countries, Turkey's EU Minister and Chief Negotiator Volkan Bozkır has said.

In his first official visit to Berlin after assuming office in late August, Turkey's EU minister Bozkır tried to convince EU heavyweight Germany to use its influence in the 28-member bloc to help revive Turkey's stalled membership talks.

Bozkir told journalists on Tuesday after his meeting with Michael Roth, Germany's state minister responsible for EU affairs: "We agree that Turkey and EU really need each other, and recent developments has further increased the importance of these relations.

"During my talks, I have witnessed that Germany is attaching more importance to our relations."

Roth told Anadolu Agency: "We need a fresh momentum for the negotiations about the EU accession of Turkey.

"Germany is very much convinced that Turkey needs an EU perspective and that is why we work hard in order to open new chapters."

He underlined that he had a very fruitful meeting with Bozkir.

"I am very optimistic that we will establish a very close cooperation between me and my new Turkish colleague," he added.

The German minister expressed hope that Berlin will be able to convince other EU member states to open new chapters in Turkey's accession talks and urged Ankara to make progress in reforms, saying: "We need foremost structural reform about rule of law, democracy, and freedom.

"It would be great if we could convince all our EU partners to open chapters 23 and 24."

Chancellor Angela Merkel's Christian Democrats have long opposed a full EU membership perspective to Turkey, but agreed as part of their coalition agreement with the Social Democratic Party (SPD) in 2003 that talks with Turkey should continue in an "open-ended" way, without a pledge for full membership.

"Both Turkey and Germany are concerned over the stalemate in the past three years in the membership talks," Bozkir said.

He underlined that Turkey's recent democratic reforms and program to adopt European standards were praised in Germany and the steps would play a role in reviving the stalled membership talks.

As a candidate country, Turkey has to successfully conclude negotiations with the EU in 35 policy chapters, which foresee reforms and adoption of European standards, in various policy areas for its EU membership.

No new chapters have been opened in the past three years, mainly due to the Cyprus issue and the blockage by former French President Nicolas Sarkozy, who opposed Turkey's EU membership.

German government had announced last month its support for opening negotiation chapters 23 and 24, on "judiciary and fundamental rights" and "justice, freedom and security" respectively, stressing that this would further strengthen democratization.

But the EU member Greek Cypriot administration has blocked opening new chapters with Turkey due to the ongoing dispute by Ankara over the divided island of Cyprus.

The island of Cyprus has remained divided into Greek and Turkish zones since a Greek-Cypriot coup was followed by a Turkish peace mission to assist Turkish Cypriots in the north in 1974.