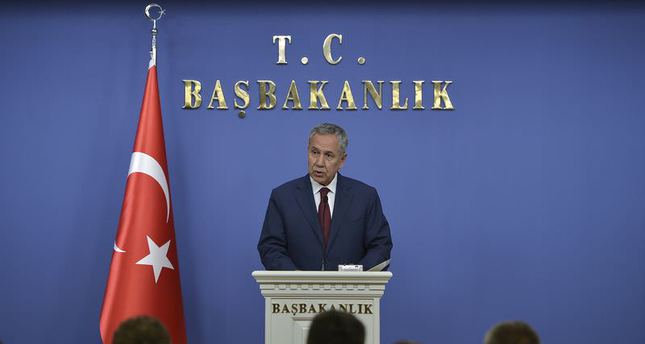 by AA Oct 14, 2014 12:00 am
The Turkish government needs to bring in a new comprehensive law to reform domestic security so it can handle massive acts of violence instantly and more effectively, Turkish Deputy Prime Minister Bülent Arınç has said, following a week of deadly protests in the country.

Arınç was speaking on Monday after the illegal, pro-Kurdish protests hit Turkey, mainly in its southeastern provinces, sparked by ISIS militants' penetration of the Syrian Kurdish town of Kobani, also known as Ayn al Arab, on October 6.

He told a press conference following a Council of Ministers' meeting: "We have come up with ... a comprehensive domestic security reform in Turkey as sole amendments to existing laws and additional authorities for security forces won't be enough."

During the protests which spiraled into acts of aggression that claimed at least 34 lives, the protesters used the pretext that the Turkish government had allegedly done nothing to halt the relentless advance of the militants in the border town, which has become a scene of fierce street battles between Kurdish groups and ISIS militants.

Arınç said the cabinet meeting examined reports presented by the ministers of the interior and justice on the challenges encountered by the security forces while intervening in last week's incidents.

"We determined that efforts will be made towards strengthening the hands of the security forces in the case of social acts turning into violence," he added.

Arınç noted that the new security law must enhance the organization and coordination capacity of all related security units so that such large-scale incidents could be quelled right away.

He disclosed that 20 of Turkey's provinces witnessed incidents bordering on violence within a total number of 1,419 incidents.

"Five terrorists were captured as dead and three others after being wounded. At least 1,954 were taken into custody, including eight foreign nationals."

Arınç went on to say 67 political party offices, 2,039 buildings including 71 district governorates, and 161 police stations and 242 schools were damaged, along with 1,417 vehicles including 551 police cars and 866 civilian vehicles.

While preparing the new security reform, he noted that the government would review and work on examples from EU-member countries to find practices and authorities that could be used as a base and implemented in Turkey.

Regarding international anti-ISIS coalition led by the U.S., Arınç, also the spokesman for the Justice and Development (AK) Party government, said Ankara was of the same mind as Washington on certain issues regarding the train-and-equip campaign for moderate opposition forces in Syria.

"Turkey can coordinate (with states in the anti-ISIS coalition) on any issue that matches up with its national interests," he said.

Arınç emphasized that Turkey may take part in training moderate Syrian forces, not supply them with weapons and equipment.

The train-and-equip program aims to back moderate Syrian opposition forces in their fight against ISIS militants and the al-Nusra Front in Syria as well as against the regime of President Bashar al-Assad, U.S. State Department spokeswoman Marie Harf explained on Saturday.

In light of Turkey's agreement to contribute to the training and equipping of moderate Syrian opposition forces, a joint U.S. Central Command and European Command team are scheduled to pay a visit to Turkey next week.