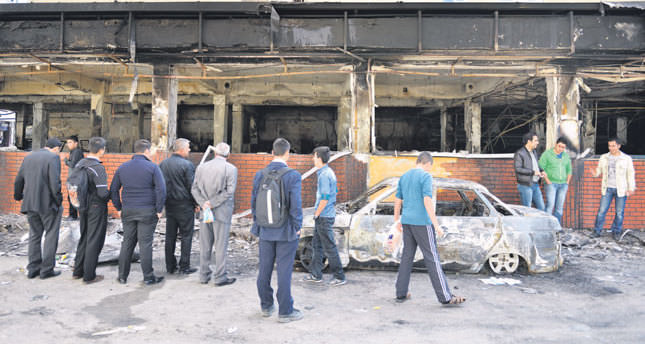 Referring to the violent Kobani demonstrations, Prime Minister Davutoğlu said on Tuesday that the balance between freedom and security will be ensured to prevent vandalism in Turkey, as Parliament discusses the German model to combat it

Prime Minister Ahmet Davutoğlu vowed yesterday to ensure the balance between freedom and security in Turkey in order to prevent vandalism – in reference to the latest Kobani protests that morphed into violent clashes between pro-PKK and anti-PKK Kurdish groups. Speaking at the Justice and Development Party (AK Party) group meeting at the Parliament, Davutoğlu denounced the provocateurs and vandals in Kobani protests that claimed dozens of lives in the last week, and said, "We [Turkey] will show no mercy to those who dare to threaten Turkey and disturb the public order." Last week, nationwide Kobani protests saw clashes between anti-PKK citizens and pro-PKK supporters who accused the government of not helping the people in Kobani, a city under siege by the Islamic State of Iraq and al-Sham (ISIS). PKK supporters had engaged in clashes with members of the Free Cause Party (HÜDA PAR), an opposition party that the PKK claims to have links with ISIS and the police forces.

Thirty-four people were killed in riots that originally began as a protest over the government's "inaction" over the ISIS assault on Kobani, a Syrian Kurdish town near the Syrian-Turkish border, also known as Ayn al-Arab.

A need to issue comprehensive legislation over preserving domestic security surfaced with the deadly protests that shook the country. The protests prompted the government to adopt solid measures against street violence, which continues to pose a threat to the country's security, starting with the Gezi Park protests that began as silent protests but later turned into violent clashes between the police and protestors.

Ankara hopes to double the sentences handed down for the offences in question both to deter the public from staging such protests again and to raise the security standards to Western levels. As part of the German model, the government will review and work on examples from EU-member countries to find practices and precedents that could be used as a base and implemented in Turkey.

The German model that is on the government agenda allocates more powers to the police in cases of violence. Should the German model be enacted, the police will have the authority to detain suspects and take them to a protected area.

The new legislation not only expands the powers of the police, but also places stricter punishments for offences such as damaging public property and concealing identities by wearing masks during protests.

The protestors who are accused of harming public property currently face a sentence of one to eight years in prison, and two to four years in jail is sought for those who prevent public officers from carrying out their duties by threatening them. These sentences will increase under the changes that are about to take place.

Davutoğlu asserted that the reason behind those provocations and vandalism activities is to disturb public order. Reminding that 531 private cars, 631 officials' cars, several ambulances, 1,122 buildings including 241 schools were set ablaze during the protests, and dozens of businesses in southeastern and eastern Turkey were vandalized, the prime minister said that the first target of vandals were public buildings and public authority.

He added that vandals and provocateurs aimed to erode the reconciliation process that started between Ankara and the Kurds with AK Party initiatives.

"The reason behind burning businesses down is the investments made to the region with the reconciliation process. The process mobilized regional bazaars and markets, and brought peace and development to the region. They [the provocateurs] are annoyed about this development because they know that if the region develops, they will not answer their call for terror," said the prime minister, emphasizing that the reconciliation process is not an alternative to public order.

He added that no matter what happens, the public order will be guaranteed by the government. "The public order was targeted in this violence. They will be accountable before the law," said Davutoğlu.

Slamming the pro-Kurdish People's Democratic Party (HDP) calling for street protests last week and fuelling provocations across the country, Davutoğlu said that those vandals and perpetrators had been following the HDP's instruction, and the main opposition Republican People's Party (CHP) supported the HDP's stance toward the protests. Since the beginning of the protests, CHP youth branches and some CHP deputies were criticized by political actors for fuelling the protests with provocative remarks on social media. On the first day of the protests, some CHP youth branches announced on their Twitter accounts that the people of Kobani are not alone, and called for demonstrations in Istanbul's Kadıköy and Beşiktaş districts – the districts in which CHP supporters are most represented.

Davutoğlu, touching on the HDP and CHP's stance toward the provocations, said they should be ashamed of themselves.

The prime minister said that the AK Party will always stand against vandalism and never accept such provocations across the country, especially as Turkey continues to drive toward its 2023 target with determination to be a key player both in the region and across the world.