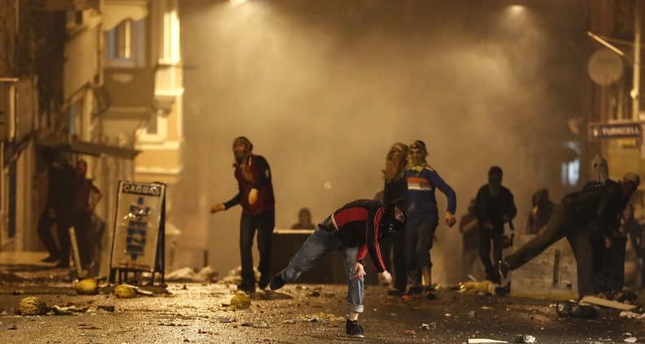 by Daily Sabah Oct 15, 2014 12:00 am
Pro-Kurdish Peoples' Democratic Party (HDP) Diyarbakır deputy Altan Tan said, "We [HDP] should have been more careful while calling people to take to the streets. We should have considered before and after [the call]. I wish we could do the same with Bahçeli [Nationalist Movement Party (MHP) leader]," in reference to the HDP's calling for street protests.

In an interview with the Turkish daily Hürriyet, Tan said that as a political party, the HDP has the right to call on its supporters to demonstrate. Pointing out that he is in the HDP's party assembly and a member of the Central Executive Board (MYK), Tan held himself partly responsible for the violent demonstrations and said that they did not accurately predict what was to come.

Last week, Turkey saw fierce protests that morphed into violent clashes between pro and anti-PKK Kurdish groups after the HDP called on its supporters to take to the streets as a reaction to Ankara's policies in Syria. The demonstrations across the country claimed dozens of lives, while hundreds of buildings and businesses were set ablaze in eastern and southeastern Turkey.

The reason behind the protests was the Islamic State of Iraq and al-Sham (ISIS) siege on the Kurdish town of Kobani in northern Syria. Accusing the Turkish government of not doing anything to help the people of Kobani, pro-PKK groups caused serious unrest in the country.
"We should have used discourse that would prevent the devastation […] Our deputies, mayors and chairman should have prevented the violence," Tan said while criticizing his party.

Underscoring that he did not agree with MHP leader Devlet Bahçeli's political ideology, Tan still praised his stance toward the protests.
During the protests, pro-PKK groups set MHP organizations ablaze and attacked MHP supporters. Bahçeli, issuing a statement, called for common sense and noted that no one should take to the streets with MHP flags or slogans to prevent any further clashes between nationalists and pro-PKK groups.

When asked who attacked first during the protests, Tan replied, "Based on my predictions, at first, demonstrators attacked supporters of Hüda-Par [the Free Cause Party] and killed three of them in their businesses. Then, they took up arms against the demonstrators."
In an unprecedented move, Tan said that the HDP, which received 10 percent of the vote in the recent presidential election with HDP leader Selahattin Demirtaş's candidacy, harmed the atmosphere it had created during the campaign.

Regarding the reconciliation process, Tan underlined that PKK leader Abdullah Öcalan, who is serving a life sentence on İmralı Island, is determined to reach a solution through negotiations. Yet, Tan asserted that the PKK headquarters in Iraq's Qandil Mountains is not as optimistic as Öcalan about the process.

"As a political party, the HDP is, of course, on the side of reconciliation and negotiation, but it is in a bind and torn [between two sides]," Tan said in reference to the HDP's stance toward the process.

Tan further proposed that journalists and politicians hold talks with Öcalan to ensure transparency and healthy communication between both sides.