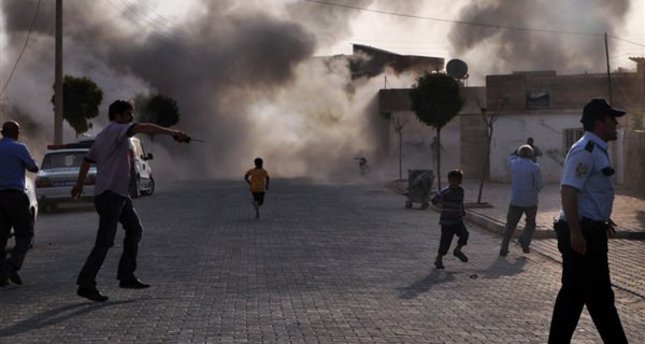 by Daily Sabah Oct 15, 2014 12:00 am
Turkey's main opposition Republican People's Party (CHP) leader Kemal Kılıçdaroğlu, who previously said, "We don't want the Turkish Armed Forces [TSK] to enter into other [countries'] soil," explaining that his party would support a parliamentary motion authorizing a ground operation by the Turkish army aimed at saving the Syrian town of Kobani and repelling the Islamic State of Iraq and al-Sham (ISIS) as long as it was limited.

ISIS is currently advancing on the Syrian town of Kobani, also known as Ayn al-Arab, on the Turkish-Syrian border. An estimated 200,000 Syrian Kurdish refugees have already fled into Turkey over the past three weeks.

Speaking at his parliamentary group meeting on Tuesday, Kılıçdaroğlu said, "Kobani is important for Turkey's security. If ISIS seizes Kobani we will have a border with a terrorist organization."

However, Kılıçdaroğlu also emphatically rejected any deployment of foreign soldiers in Turkey and the two crucial demands that Turkey pushes for, a safe zone in Syria and a no-fly zone. Saying that resisting terrorism is a human duty, Kılıçdaroğlu said, "We defend the territorial integrity of Iraq and Syria."

President Recep Tayyip Erdoğan has called for a buffer-zone to be established for Syrian refugees as hundreds of thousands of civilians are still fleeing into neighboring countries, including Turkey.

Prime Minister Ahmet Davutoğlu accused the CHP and People's Democratic Party (HDP) for voting against his government's Iraq-Syria motion for the sake of keeping Syria's Bashar al-Assad in power.

Davutoğlu also criticized the CHP and HDP for their stance during last week's violence that killed 34 people. The protests were carried out by pro-Kurdish groups in Turkey's southeastern provinces after ISIS militants penetrated Kobani and pounded its perimeter on Oct. 6.

"Turkey is against both ISIS and Assad. But will Kılıçdaroğlu and the HDP be able to stand against them that clearly? Their aim is to protect the Syrian regime and Assad," he said.

Davutoğlu said that the two parties have the same mentality as Assad's Baath Party as "they view Turkey's cities just as Assad views Damascus."

Erdoğan and the Turkish government, led by Davutoğlu, have been criticizing the Turkish opposition and the West, especially the U.S.-led international coalition's air offensives against ISIS targets in Iraq and Syria for only raising their voice against ISIS terror in Kobani but staying silent on the Assad regime's aggression against its own people during the four-year civil war that has left at least 190,000 people dead.

"Where were you when Turkmens in the towns of Bayırbucak and Çobanbey and Arabs in Tal Abyad were being slaughtered?" he asked the leaders of the two opposition parties.