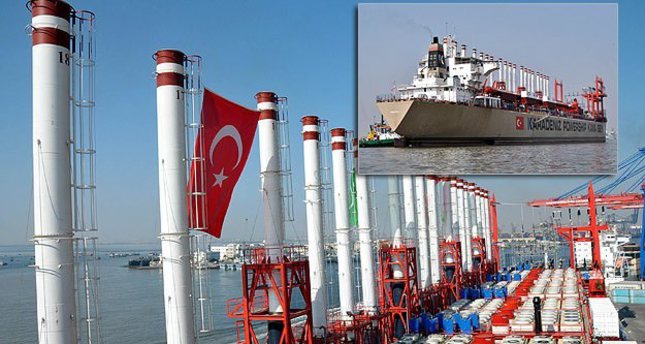 by AA Oct 16, 2014 12:00 am
Israel has preliminarily granted permission to a Turkish generator ship to anchor off the coast of the Gaza Strip to provide the power-starved Palestinian enclave with electricity, a Palestinian Authority (PA) official has said.

"Israeli authorities have given preliminary approval to the Turkish power-generating ship to anchor at the nearest point off the coast of the Gaza Strip," Hussein al-Sheikh, head of the PA's civil affairs department, told Anadolu Agency on Thursday.

He said Israel had initially rejected the idea when it was first proposed.

"But they've given preliminary approval in recent days," he added.

Al-Sheikh said the PA and United Nations were pressuring Israel to give the project final approval.

Earlier this week, Turkey announced the allocation of $200 million for the reconstruction of the Gaza Strip until 2017 as part of international efforts to rebuild the enclave, which was devastated by a recent Israeli war.

For seven weeks in July and August, Israel pummeled the Gaza Strip with the stated aim of halting rocket fire from the embattled Palestinian territory.

More than 2,160 Palestinians were killed during Israel's onslaught-the vast majority of them civilians-and some 11,000 injured, while vast swathes of the territory's infrastructure were left in ruins.