Kerry: No discrepancy between Ankara and anti-ISIS coalition 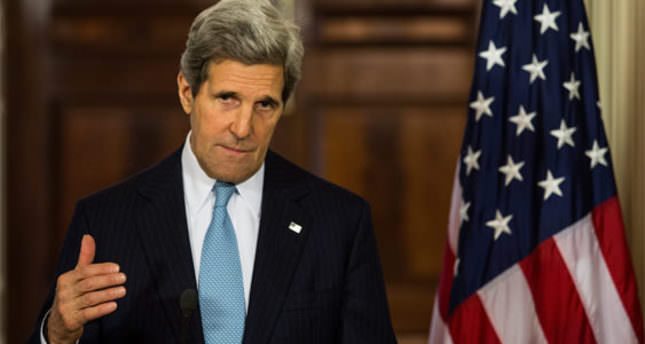 U.S. Secretary of State John Kerry said on Tuesday that there is no discrepancy between Turkey and the anti-ISIS coalition, as Turkish and American officials continue to hold talks on the extent to which Turkey will participate in the coalition

U.S. Secretary of State John Kerry said on Tuesday that there is no discrepancy between Turkey and the U.S.-led anti-ISIS coalition fighting against the Islamic State of Iraq and al-Sham (ISIS), which controls large parts of the region, upon a reporter's question at a press conference regarding Turkey's involvement in the coalition.

Turkey's position in the coalition is still at the center of the action plan to combat ISIS, and Turkey began taking a more active role in the coalition when Washington and Ankara agreed to train and equip moderate Syrian opposition groups fighting against ISIS.

"General Allen was [in Ankara], he had long meetings with [Turkish officials]. The meetings, in his judgment, helped to move the ball forward. And so I really think that Turkey obviously has a very important role to play in this process going forward. And I'm confident that that is going to be further defined by Turkey itself on their timetable as we go forward in assigning and undertaking responsibilities within the coalition," Kerry said. The U.S. seeks to use Turkish bases, especially the İncirlik base, which is a key installation within 100 miles of the Syrian border, in the military campaign against ISIS. But Turkey has continuously been pushing for its demands to be addressed including the establishment of a safe zone and a no-fly zone. Kerry added that Turkey agreed to host, train and equip the Syrian opposition and allowed the use of certain facilities but he did not get into specifics.

While talks between both sides on establishing a no-fly and safe zone continues, France, which is the second-most prominent country in the anti-ISIS coalition after the U.S., announced last week that it supported Turkey's demand for a safe zone. Kerry described a no-fly zone as worth examining while U.S. Secretary of Defense Chuck Hagel has shown little enthusiasm for the idea, but the coalition countries have yet to reach a definite conclusion.

On Wednesday, Syria rejected calls for the creation of a safe zone on its territory, saying it would treat any such bid as an act of aggression.

"Turkish attempts to establish a safe zone on Syrian land constitute a flagrant violation of the principles and objectives of the U.N. charter," the Syrian Foreign Ministry said.

Russia, one of the strongest supporters of Syrian President Bashar Assad's regime, has said any decision on a safe zone in Syria needs to be made by the U.N. Security Council with the approval of the Syrian regime, while Iran has warned the West against military action in Syria.

According to the Turkish government, the establishment of a no-fly zone is a must to halt attacks by the Assad regime on Syrian opposition forces that Ankara and Washington agreed to train and equip in addition to a safe zone along the Turkish-Syrian border for refugees fleeing ISIS attacks.

During the negotiations, each issue has been discussed separately and the first absolute decision in which both sides have agreed is to train and equip moderate Syrian fighters. As several Turkish media outlets reported, Turkey and the U.S. also agreed on using Turkish airspace for logistical purposes. Reportedly, while Ankara introduced the demand of "train and equip," Washington demanded to use Turkish airspace.

As part of the talks, a joint U.S. Central Command-European Command planning team arrived in Ankara on Tuesday night and met with Turkish officials at the headquarters of the Turkish General Staff to discuss the ongoing military campaign against ISIS.