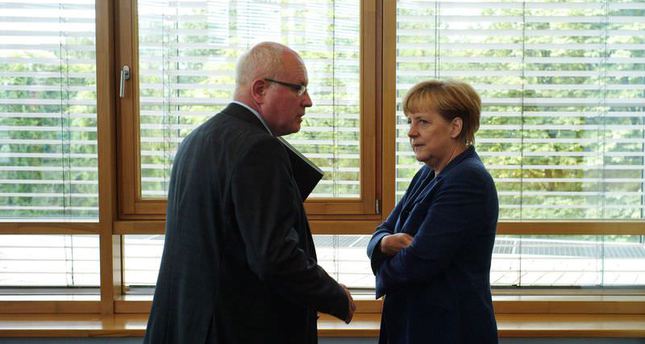 by Daily Sabah with Agencies Oct 16, 2014 12:00 am
A senior ally of German Chancellor Angela Merkel has left open the possibility of arming the PKK as part of efforts to defeat the Islamic State of Iraq and al-Sham (ISIS), which controls large tracts of land in the region.

Germany is sending weapons to Kurds in northern Iraq but Merkel has previously ruled out supporting the PKK, which took up arms against the Turkish state with an aim to create an independent state in the southeastern region.

Strictly opposing such a move, Foreign Minister Mevlüt Çavuşoğlu in September stressed that international weapons aid being provided to Kurdish peshmerga forces to help them in their fight against ISIS militants should not end up in the hands of the PKK.

"I know the problems that Turkey has with the PKK but to sit back and watch as ISIS takes important border towns and develops increasingly into a threat to global security cannot be the solution," Volker Kauder, the leader of Merkel's Christian Democrats (CDU) in parliament, told Spiegel Online.

"I do not rule out supporting other groups. But this would have to be done with Turkey, not against it. That also applies to support for the PKK," Kauder added.

On Sunday, Germany will not call for the removal of the PKK from the EU's list of terrorist organizations, German Interior Minister Thomas de Maiziere said.

Maiziere gave the remarks in a televised interview when he was asked about discussions in Europe regarding delisting the outlawed group on the grounds of combatting ISIS.

The minister said the PKK was responsible for the recent violent street protests in Turkey.

"The PKK is a terrorist organization and it will continue to stay so for us," he said.

The EU had added the outlawed party to its list of terrorist organizations in 2004. The group is also on the terror lists of the U.S., NATO and Turkey.

U.S.-led efforts to halt the militants have focused on the Kurdish Syrian town of Kobani, near the Turkish border, over the last few weeks.

Even though some German politicians proposed to remove the outlawed PKK from the terrorist organizations list, the officially-recognized Kurdish Regional Government (KRG) is still on a black list of the U.S.

For KRG officials, they are in a tough corner as well. A Turkish diplomat told Daily Sabah that the U.S. is still keeping the KRG's ruling Kurdistan Democratic Party (KDP) and coalition member the Patriotic Union of Kurdistan (PUK) on a black list. Both KRG President Massoud Barzani's KDP and Jalal Talabani's PUK have been in the Tier 3 group of organizations since 2001 due to their alleged support of terrorism under the U.S. Patriot Act. Those in the Tier 3 group of organizations cannot obtain visas to come to the U.S. without having a waiver, which is usually provided after meeting certain criteria. Barzani cancelled his official visit to Washington in February in protest against U.S. sanctions against his party. "Until the issue of giving visas to the citizens of Kurdistan is solved, I won't visit the United States," Barzani is said to have written to the White House when he cancelled his trip, according to Kurdish media.