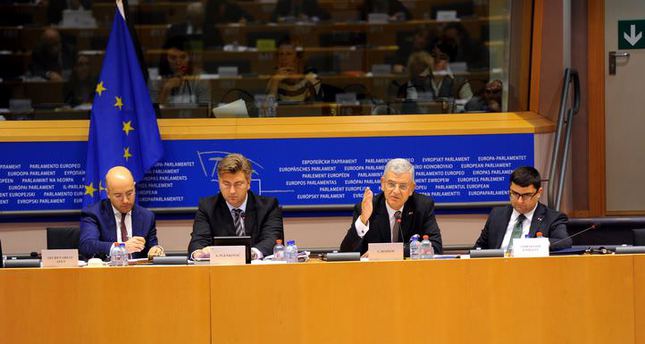 by Ali Ünal Oct 16, 2014 12:00 am
EU Minister and Chief Negotiator Volkan Bozkır addressed the European Parliament Foreign Affairs Committee and exchange views and comments with committee members during his visit to Brussels on Thursday. In his presentation, Bozkır said that, as Turkey's image in the EU has deteriorated in recent years, the EU's image in Turkey has also changed in a negative way. Therefore, Turkey's newly announced New European Union Strategy will be beneficial to both the EU as well as Turkey. Underscoring that Turkey's new strategy aims to eliminate obstacles to EU membership by accelerating the dynamics of Turkish-EU relations, Bozkır emphasized that the new strategy is based on three important pillars: The political reform process, socio-economic transformation in the accession process and an EU communication strategy.

After his presentation, Bozkır took questions put forth by European parliamentarians. Answering a question regarding Turkey's stance on ISIS terrorists, Bozkır said that Turkey is against all elements that harm regional stability and underscored the necessity for a broader strategy that aims to fight against these elements. "Fighting against ISIS only in the context of Kobani is killing mosquitoes, but in order to restore regional stability, we should drain the swamp." he said. Underscoring the importance of the coalition fighting against ISIS, Bozkır said, "Even though nobody wants to send troops to fight against ISIS, some people criticize Turkey for not sending troops. This is unfair criticism."

Bozkır said that it is really unfair to say that Turkey is not doing much to help Syrian Kurds in Kobani, as that they have continue to provide aid to them, especially in terms of humanitarian assistance. "We opened our borders to Kobani residents who escaped from ISIS terrorists, and now there are [more than] 200,000 people in Turkey who fled in recent weeks. We welcomed all these people without questioning their ethnicity or religion. Even this figure [alone] reveals the size of our contribution," he said. Emphasizing that since the civil war in Syria began, Turkey continued its open door policy to Syrian refugees, and there are more than 1.6 million refuges in Turkey that has amounted to over $4.5 billion (TL 10.273 billion).

Bozkır added that the Kobani crisis should not be mixed together with Turkey's reconciliation process – a process the government is determined to continue.

He also met with the EU Enlargement and Neighbourhood Policy Commissioner, Štefan Füle, and the Chairman of the European Parliament Committee on Foreign Affairs, Elmar Brok.