PM: All inclusive plan must to solve crisis in the region 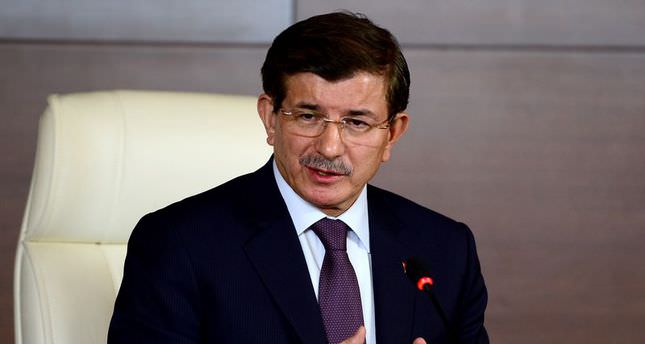 Calling for a comprehensive action plan to solve the chaotic atmosphere in the region, Prime Minister Ahmet Davutoğlu said a unilateral intervention in Syria would bring more harm than good

Prime Minister Ahmet Davutoğlu on Wednesday said a unilateral intervention in Syria would do more harm than good as he called for an "all inclusive" effort to resolve the crisis.

In a late night interview with Al Jazeera Arabic TV, the prime minister said Turkey's demand for a safe zone for refugees includes Syria's highly populated regions along the Turkish border, which have been hit hard by the Bashar Assad regime and the Islamic State of Iraq and al-Sham (ISIS).

"It must be in the north of Aleppo as it has been under threat from both the regime and ISIS militants," Davutoğlu said.

Turkey has been pushing the international community, including the U.N., to establish a no-fly zone and a safe zone for refugees inside Syria near the Turkish border. Thousands of civilians from the Syrian border town of Kobani have been fleeing to Turkey since mid-September when their lives were put under threat due to the ongoing clashes between ISIS and Kurdish forces.

Underscoring that the safe zone must also involve regions in Idlib near the border with Turkey, northern Latakia, Hasakah, Jarablus and Kobani, Davutoğlu added, "It should be an area under international guarantee so that Syrians can feel secure from air and land offensives."

He said Turkey would prefer the U.N. Security Council determine the areas to be designated as safe zone in Syria.

Bringing up the First Gulf War in the 1990s, Davutoğlu said the international coalition could provide a safe zone like it did during that time to protect civilians from Saddam Hussain's attacks.

Referring to the calls for Ankara to intervene militarily in Syria to save Kobani, he said, "If you demand that Turkey intervenes alone in Syria in the absence of such a zone, it means you want Turkey to take the entire burden on its own."

Parliament ratified a motion on Oct. 2 that authorized the Turkish government and the armed forces to deploy Turkish troops to Syria and Iraq if necessary to fight any group that threatened Turkey.

But Davutoğlu said that any unilateral intervention by Turkish troops would not yield a final settlement to the overall crisis in Syria.

He instead called for an "all-inclusive intervention" together with the international community, not only to save Kobani, but against "all atrocities and villains in Syria."

"What we emphasize here is that no matter which strategy is conducted, it must be applied to all of Syria, it must neither be temporary, nor uni-dimensional or restricted to certain regions," he added.

In a press conference held on Wednesday following a meeting at the Interior Ministry, Davutoğlu said, "Only Syrian Kurds can cross the Turkish border to fight against ISIS in Kobani."

Davutoğlu, answering a question about whether Turkey will open its borders along with Syria for Democratic Union Party (PYD) forces, said, "Turkey has never closed its borders to Syrian refugees crossing into Turkey, 2,000 people have crossed into Turkey in recent days, otherwise they would be dead by now but when it comes to Turkish citizens crossing into Syria, we cannot let them be a part of the fight there, no matter which side they will be fighting for."

Davutoğlu said that Syrian Kurds are free to cross the Turkey border to join the Kobani fight. "Kurdish soldiers from Kobani came to Turkey and did not want to return there. As a matterof fact 300 PYD soldiers laid down their weapons and crossed into Turkey, they can go back any time they want."