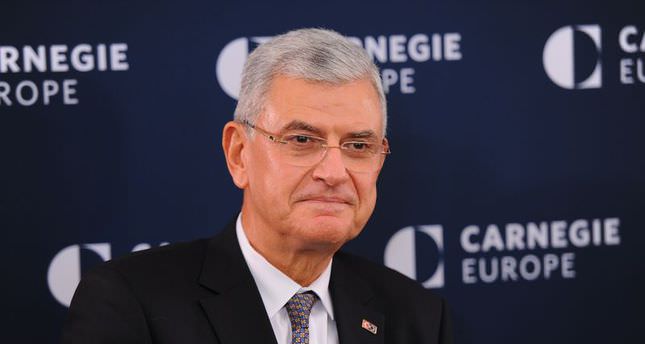 by AA Oct 16, 2014 12:00 am
Turkey decides who to arm within its own territories, Turkish Minister for EU Affairs Volkan Bozkır told reporters on Thursday in Brussels where he announced Turkey's new EU strategy.

His remarks came after Germany, on Thursday, said they can send arms to the outlawed PKK that is fighting the ISIS in Kobani.

Turkey opposes Germany to arm the PKK to fight ISIS in the Syrian town of Kobani at the Turkish-Syria border.

Bozkır said that both the PKK and ISIS were terrorist groups adding that the PKK was also on the terror lists of the U.S., NATO and Turkey.

Turkey has launched what is publicly known as "the solution process" to end more than three decades of fighting with the PKK, which has claimed more than 40,000 lives.

"It is out of question to send arms to some groups [in Turkey] secretly," Bozkır said.

He criticized Germany for debating whether to accept 16 thousand refugees into the country, while Turkey has allowed nearly 200 thousand people from Kobani fleeing ISIS attacks.

He also said that countries criticizing Turkey for not doing enough in the fight against ISIS should take action and send their troops to Syria.

The Syrian town of Kobani has been the scene of fierce battles between Kurdish groups and ISIS since mid-September.

The international coalition has been staging airstrikes on ISIS targets in Syria and Iraq since early August.

Turkey has been pushing the international community, including the UN to establish a no-fly zone and a safe haven for refugees inside Syria near the Turkish border.

Thousands of civilians from the Syrian border town of Kobani have fled into Turkey from ISIS attacks since mid-September.