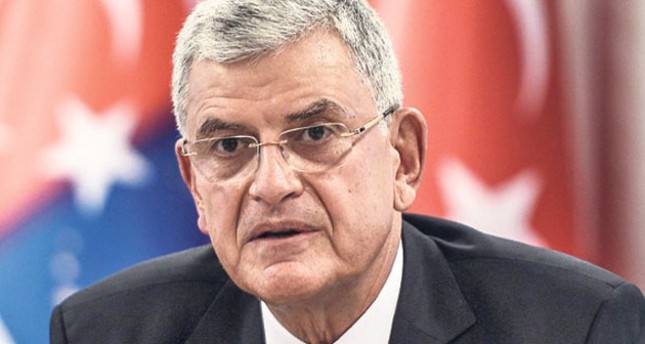 by Ali Ünal Oct 18, 2014 12:00 am
Turkey's EU Minister and Chief Negotiator Volkan Bozkır said on Thursday evening believes that the Turkish judiciary is in rude health after the Supreme Board of Judges and Prosecutors last Sunday.

"The Supreme Board of Judges and Prosecutors (HSYK) elections that took place last Sunday were excellent proof that the judicial system works well in Turkey," said Bozkır during a speech at the European Center of the Carnegie Endowment for International Peace in Brussels.

EU Minister Bozkır addressed an event called "Reenergizing the Turkey-EU Debate," which was hosted by Carnegie Europe and moderated by Financial Times' international affairs editor David Gardner on Thursday evening. Speaking at the event, Minister Bozkır said that so far they have implemented six reform packages with respect to the judiciary and emphasized that the credibility of the judicial system has always been one of the priorities of the government. ''We give a priority to judicial independence and also to the credibility of the judiciary. If you don't have a credible justice system, nothing will go in the right direction," he added.

Pointing out that the HSYK elections took place last Sunday, Bozkır said that it was proof that the judicial system works well in Turkey. ''Last Sunday, 14,000 judges and public prosecutors democratically voted for members of the HSYK. I think it is good proof that jurisdictional arrangements can be done in a democratic way," he added.

The HSYK is the country's key judicial council that is responsible for the appointment, promotion and removal of personnel within the judiciary. Almost 14,000 judges and prosecutors went to the polls on Sunday to elect 16 primary and substitute members of the high council's 22-member general assembly. The HSYK has a total of 22 members who were elected for a period of four years following a constitutional amendment made to the body's structure in a 2010 public referendum.