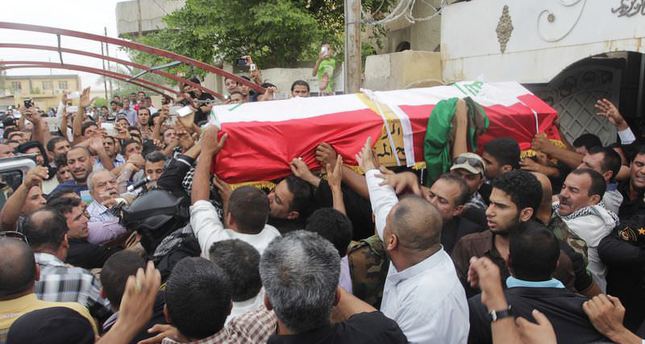 by AA Oct 18, 2014 12:00 am
Turkey has condemned a suicide bombing in Baghdad on Tuesday that killed at least 25 people, including a Shi'ite member of Iraq's parliament, Ahmad al-Khafaji.

According to Iraqi security sources, a suicide car bomber attacked a checkpoint at the entrance to one of Baghdad's Shi'ite areas on the edge of the Kadhimiya neighborhood, which is home to the Shi'ite shrine of Imam Kahdim.

Turkey's Foreign Ministry released a statement late on Friday and called for solidarity between all Iraqi parties against the "terror spiral targeting the fight against terrorism."

"Turkey will continue to support the Iraqi government's steps towards establishing stability, peace and consensus in the region," the statement added.

Khafaji, who is the Badr Organization's deputy leader, reportedly was traveling to Kadhimiya to visit the Imam Kadhim shrine at the time of the suicidal attack.

The Badr Organization, previously known as the Badr Brigades or Badr Corps, is a powerful Shiite political and paramilitary group. It is said to have close ties with former premier Nuri al-Maliki.

Al-Khafaji was a respected member of the Badr organization as well as a member of the Iraqi parliament, Iraqi security officials added.