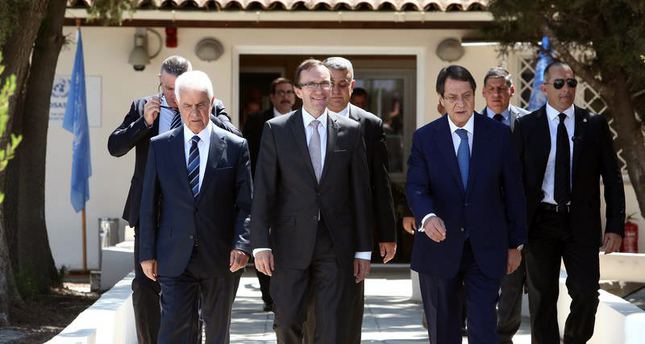 by AA Oct 18, 2014 12:00 am
The Turkish Republic of Northern Cyprus President Dervis Eroglu has sent a letter to UN Secretary-General Ban Ki-moon calling for the re-launch of negotiations with the Greek Cyprus administration.

According to a statement issued by the president's office Saturday, Eroglu called on the Greek-Cyprus side to return to the negotiating table.

The letter comes after the Greek Cyprus administration suspended talks on October 8 in retaliation for Turkey's sending a warship to monitor an oil and gas exploration mission off the Cyprus coast.

"Negotiations are the only way to reach a solution," said Eroglu, calling on the Greek Cypriot side to return to the negotiating table to reach "a fair, sustainable and negotiated solution."

The negotiations between the two sides had resumed last February after a two-year pause. The previous round of talks had collapsed because of the Eurozone debt crisis and the Greek Cypriot side's turn to occupy the EU presidency in 2012.

The island of Cyprus has remained divided into Greek and Turkish zones since a Greek-Cypriot coup was followed by a Turkish peace mission to aid the Turkish Cypriots in the north in 1974.

The Greek Cypriot administration is a member of the EU. It is internationally recognized except by Turkey, which remains the only country that recognizes the Turkish Republic of Northern Cyprus.
Last Update: Oct 19, 2014 12:52 pm
RELATED TOPICS